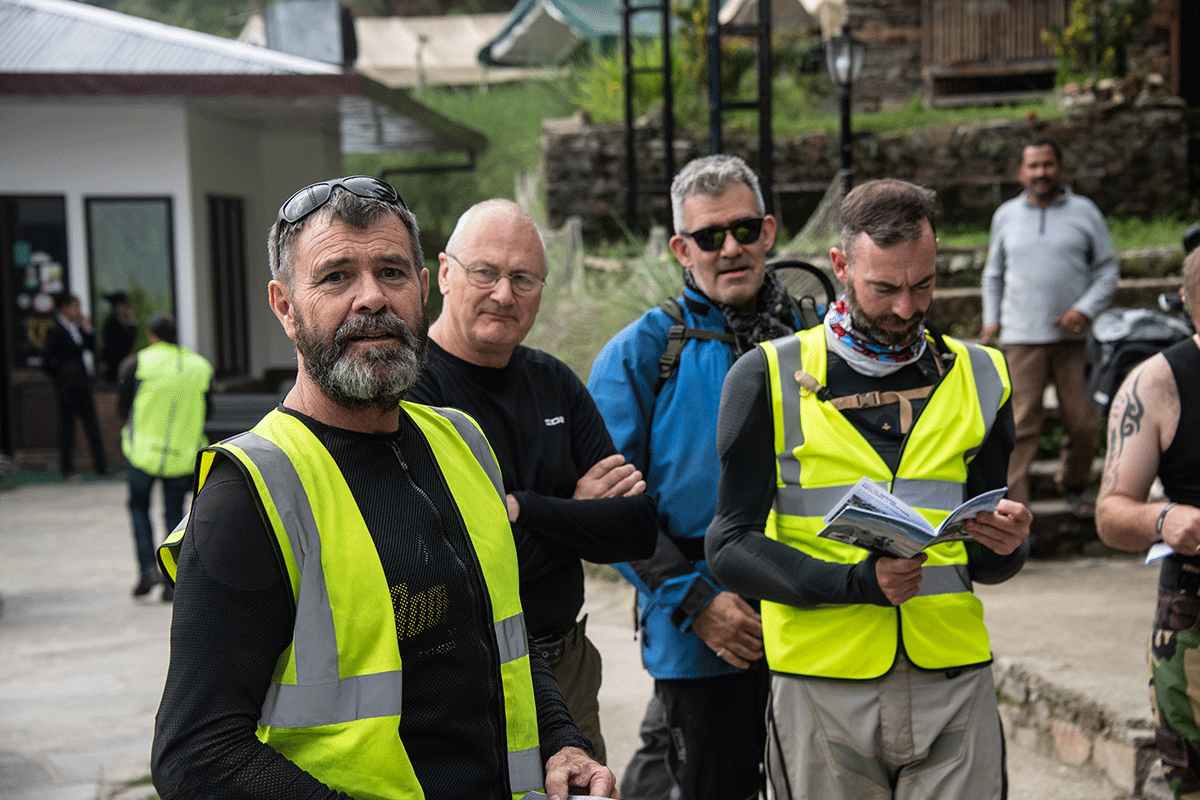 I was leading a ride in the Himalayas a few years ago and I hadn’t noticed anyone behind me for around 30 minutes or so. I knew the route quite well and had a place in mind to pull over and just wait for some time. I wasn’t concerned though, as it’s normal to have the group spread out quite a bit. I don’t encourage nose to tail riding. I find that it’s best to let everyone ride at their own pace and do their own thing. We never set a time to finish riding – an ‘Expected Time of Arrival’ (ETA) as some might call it. Yuk, how boring! We’re not an airline. In saying that, we do set a time to depart each morning. And whilst early starts can leave everyone a bit bleary eyed, it allows us to run at a comfortable pace and makes the riding way more enjoyable.

The only thing that we try to do as a group is to get to our accommodation before sunset. I’m not keen on riding in the dark, especially in the mountains. They’re challenging enough in daylight. 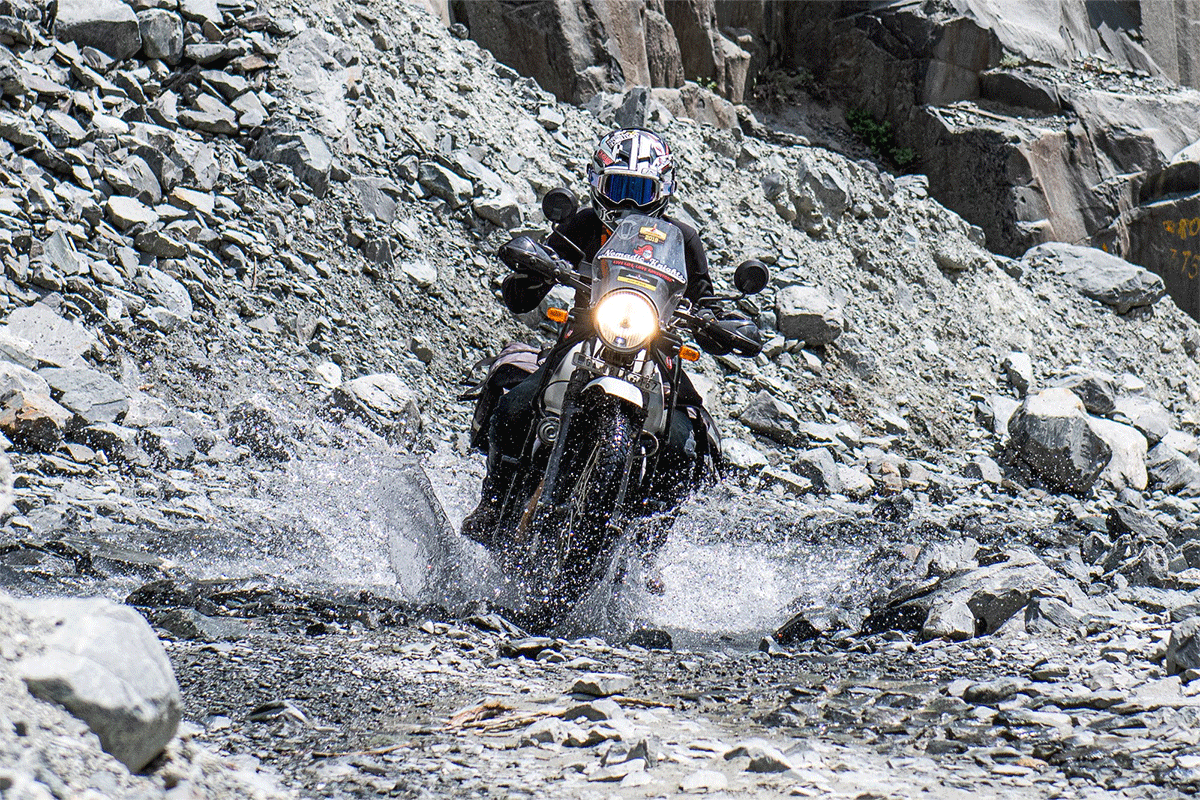 Anyway, I knew where I could stop. There was a long and narrow left curving bend cut into the cliff with a viewpoint on the other side. A big rock that I could perch myself on. Right in the middle was a deep and lengthy water crossing. I reckon it would be around 200 metres. Nothing too challenging, but enough to possibly put your feet down at some point – unless you want to land on your side. I’ve done that before. More than once. I’ve seen many riders do it also. I don’t really mind getting wet but when the water is coming straight from a glacier and snow melt, it’s uncomfortable when it’s pouring into your collar and down your neck. 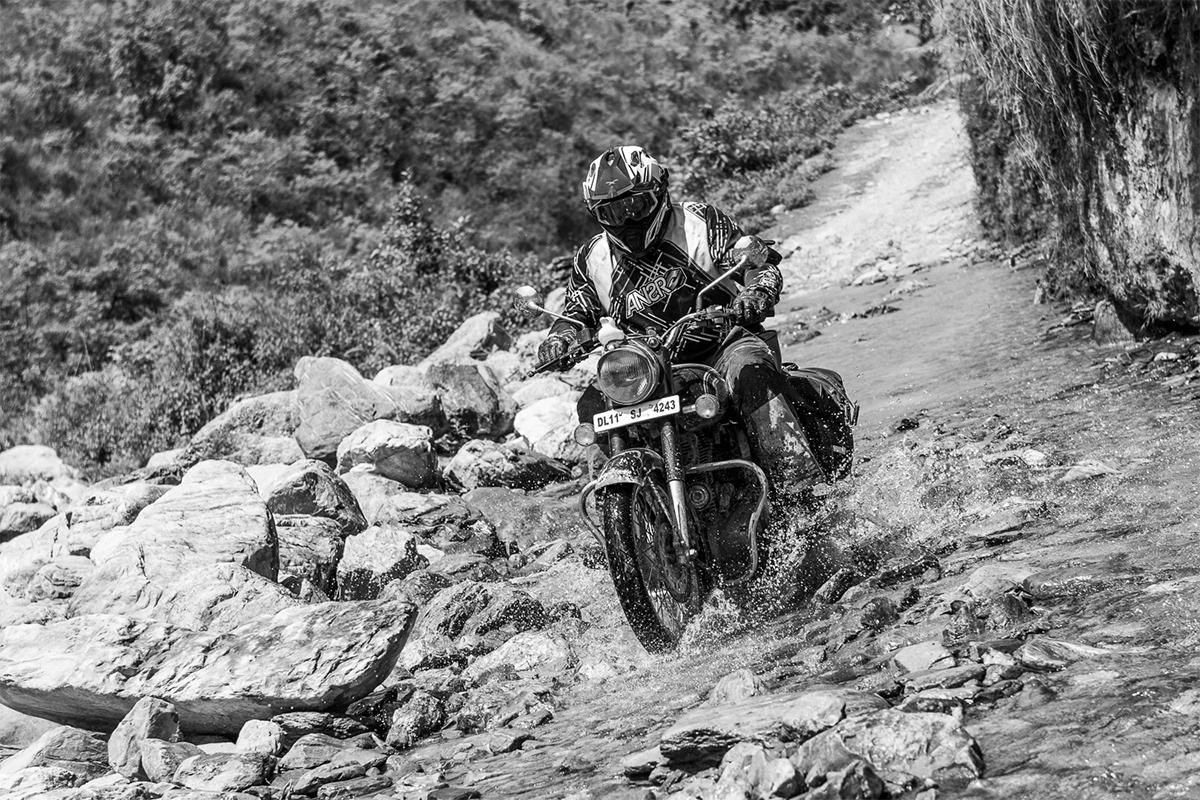 I knew that some of the riders might need help, so I took my seat on the rock and waited. Along came a local rider, a ‘mountain man’, as they’re called. He was riding a little road based 125cc Hero Honda. He stopped just before the water crossing and eyed the situation. He then rolled up his trousers. Took to the edge of the water, the deep part that is, and rode through slowly. I was watching a master at work. First gear, nice and steady, a relaxed position on the bike and he never once took his feet of the foot pegs or stood up enduro style. And here’s the best bit. He was wearing flip flops. He gets to the other side, stops, casually rolls down his trousers, gives me a wave and rides off. His riding technique was so good that I could hardly hear the little motorcycle at all. 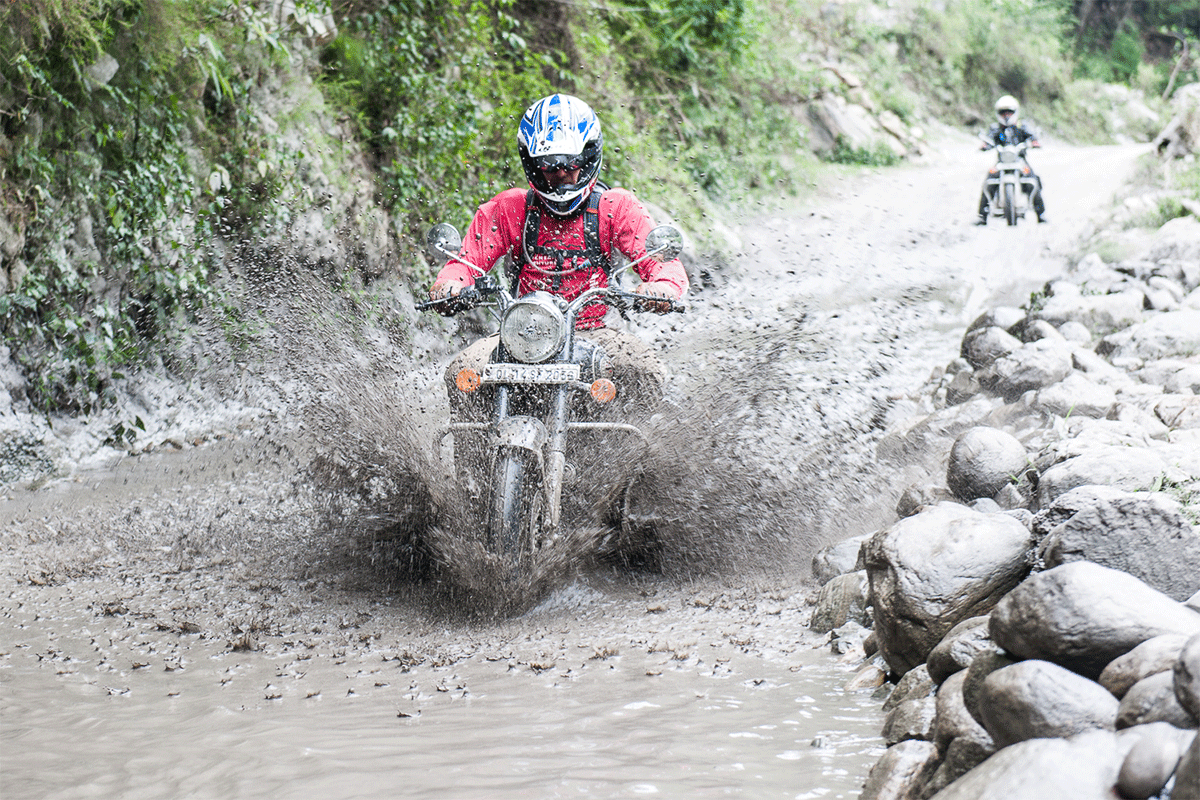 Most of the water crossings are just wide enough for one vehicle at a time. Both edges are deep as that’s where the trucks and buses push down the stones and at the same time make it the smoothest part. The shallow part, the middle, is the hardest to ride as all the stones are all pushed up the way. Of course, you can’t see this, but the locals do. They know everything about the mountains. There I was, with all my rider gear – Klim helmet, Sidi boots, Alpine Star gloves, Knox body armour, 100% goggles and so on. I don’t think I need to describe it any further. I’m sure you’re visualizing the scene. 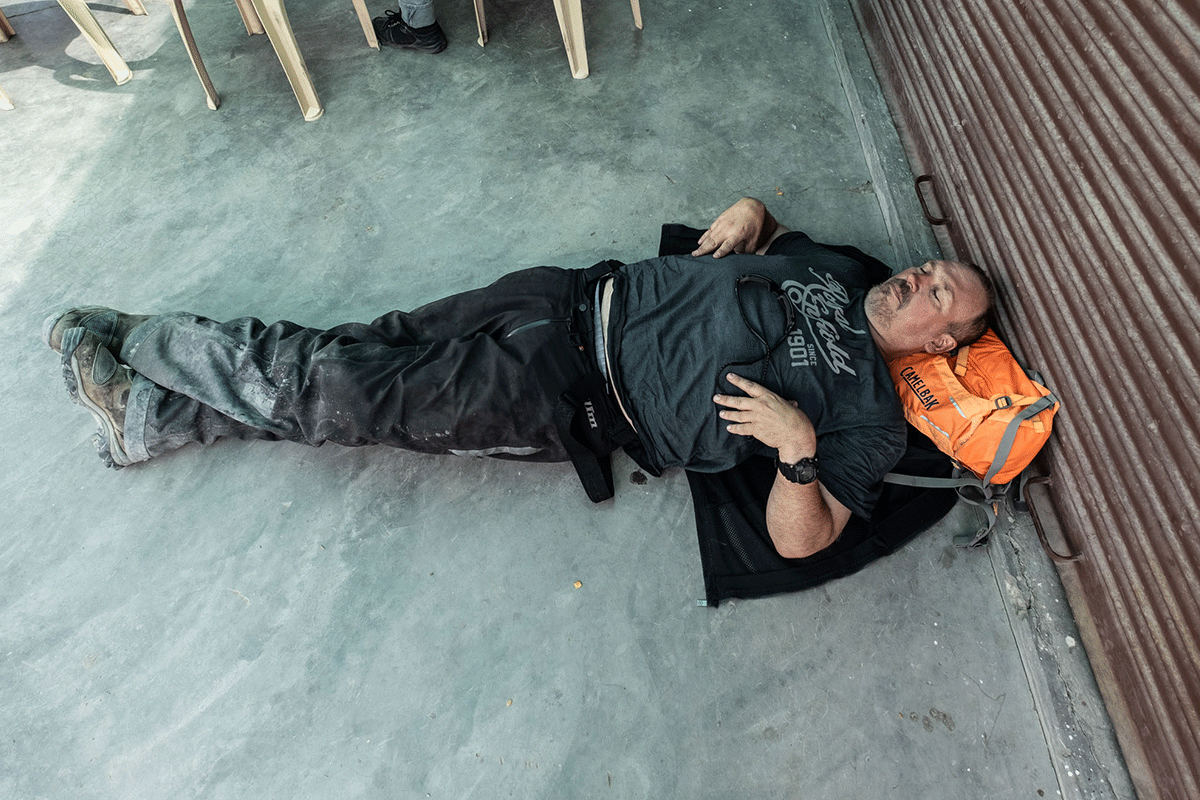 I started to think just how much easier it had been for the local Honda rider due to his skill. He wouldn’t be worrying about drying boots or rider gear. Okay, his feet would get a bit cold, but so what? His crossing was unspectacular and verging on boring. But, almost perfect. And I can guarantee, 100%, that he had never taken part in any off-road riding course or supervised training. 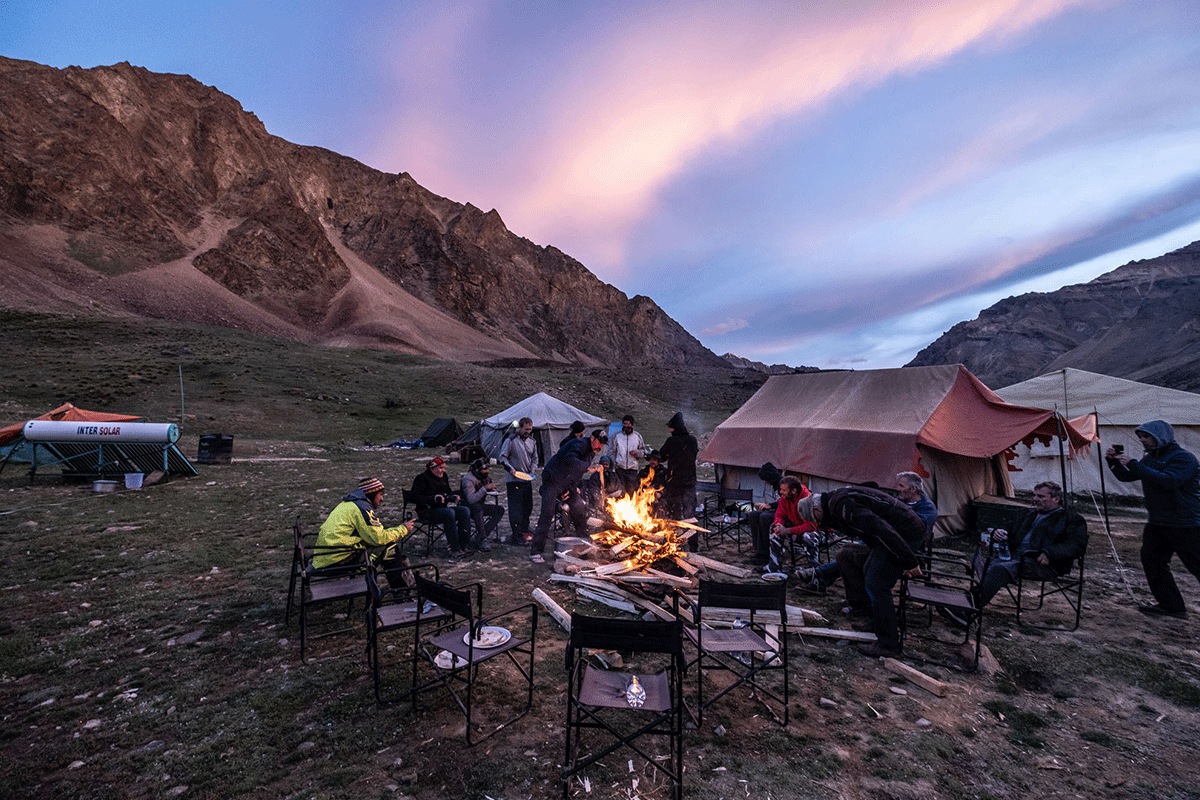 I wouldn’t suggest for one moment that riding in flip flops is a good idea. I wouldn’t do it. Nor would I suggest that anyone else does. But I’m sure he took a calculated risk and had done it hundreds of times before. Even though he had, he stopped, had a look, and then rode through. As I mentioned, almost perfectly. No drama. No heroics. What I was witnessing was a rider using his common sense. His instinct, I suppose. It’s easier said than done, and still to this day, I always try to emulate The Unknown Mountain Man. With varying degrees of success.

Why wouldn’t you. They’re awesome.