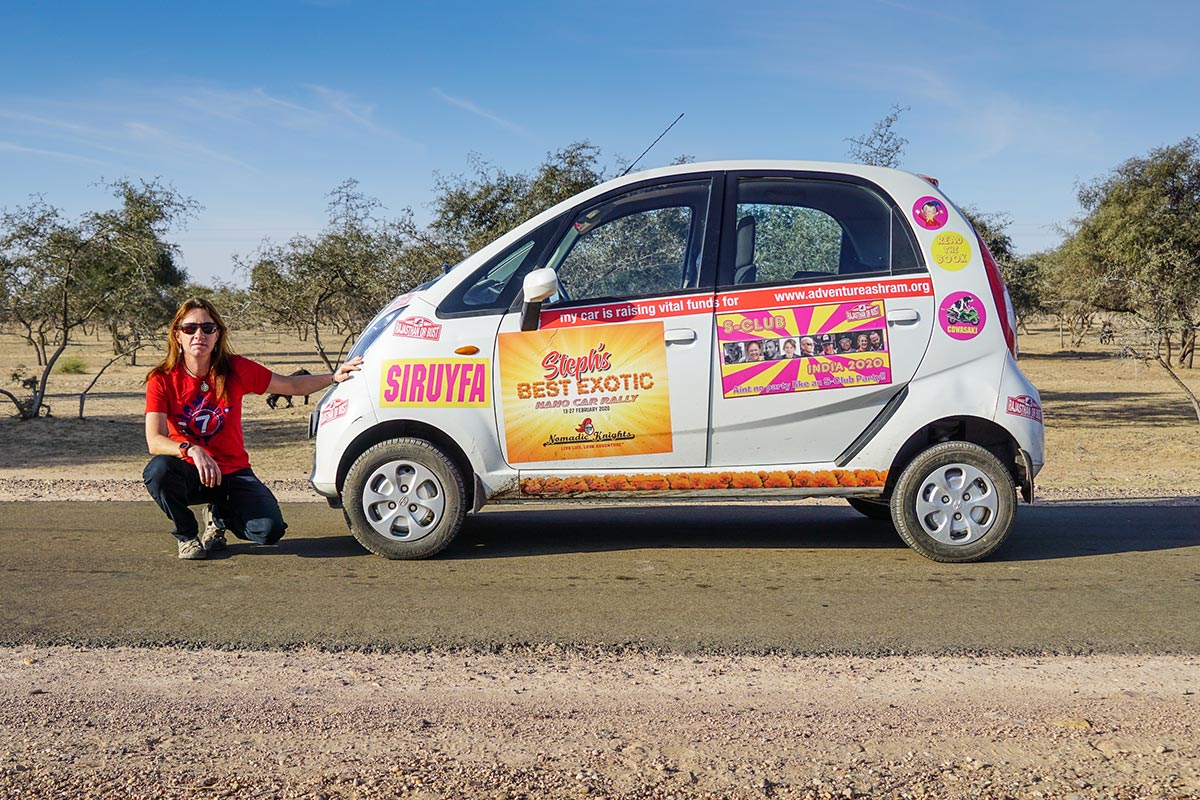 Once everyone had arrived at the resort in Delhi, we all got together to discuss the journey that lay ahead.

We had a driver briefing in the morning and everyone was introduced to their Tata Nanos, which would be theirs for the duration of the rally.

We set off on a short drive, crossing into Rajasthan to Neemrana. This was a warm up drive, nothing too challenging, but it let us get used to driving and experience the legendary Indian roads.

Since it was Valentine’s Day, we all had dinner in the main courtyard of the stunning 600 year old Neemrana Fort Palace. It’s a very special place that the romantically minded of us will remember for a very long time. 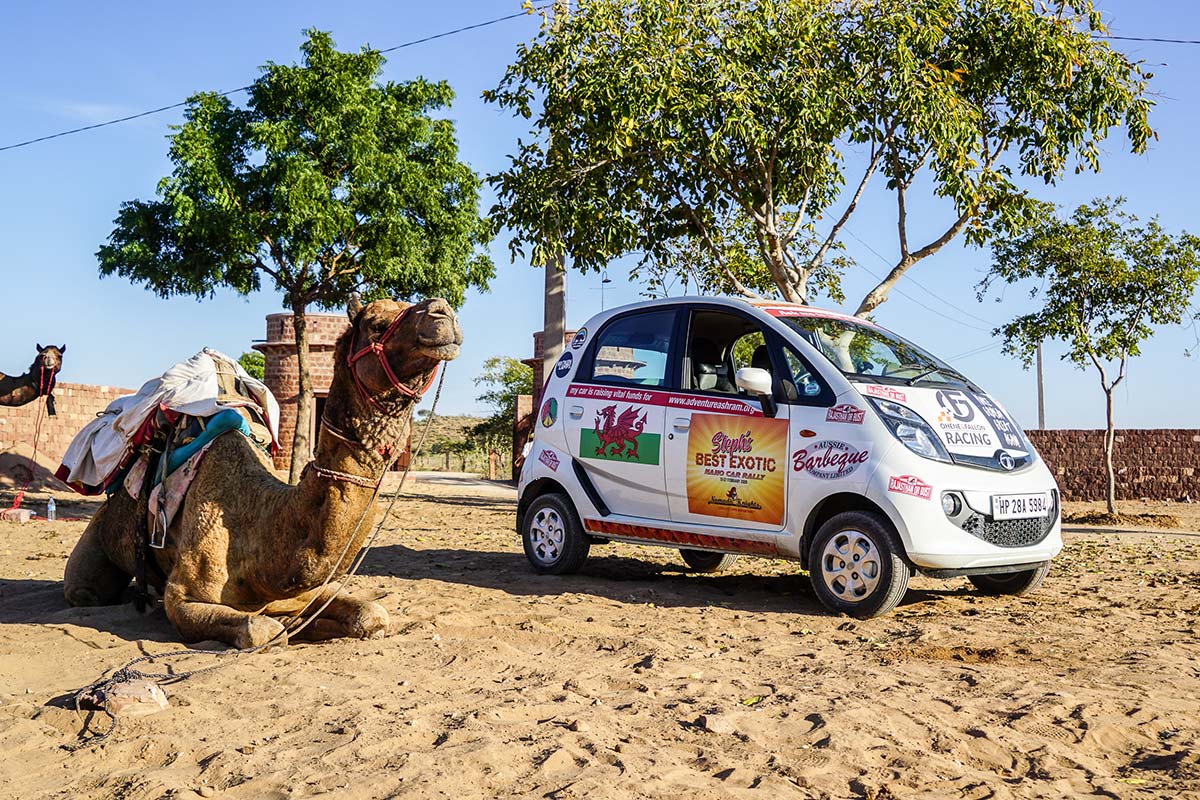 We experienced a good mix of highway and country roads as we headed deeper into Rajasthan. Mandawa was originally a trading out post for the ancient caravan routes that stopped here from China and the Middle East.

This was the first long day of the drive as we cruised across the desert terrain taking in the sand dune scenery. Osian is perched on the edge of the mighty Thar desert where you can savour the tranquility of Rajasthan in all its glory. We arrived at our desert camp in plenty of time to enjoy a camel ride in the sunset.

What an inspiring way to start the day. We set off into the cool desert morning at first light on our drive to the westernmost corner of Rajasthan. Our destination was a city that has long been considered one of India’s most treasured settings. Jaisalmer could be described as an eclectic confusion of camels, traffic, horn blasts, spices, chaos and colour. 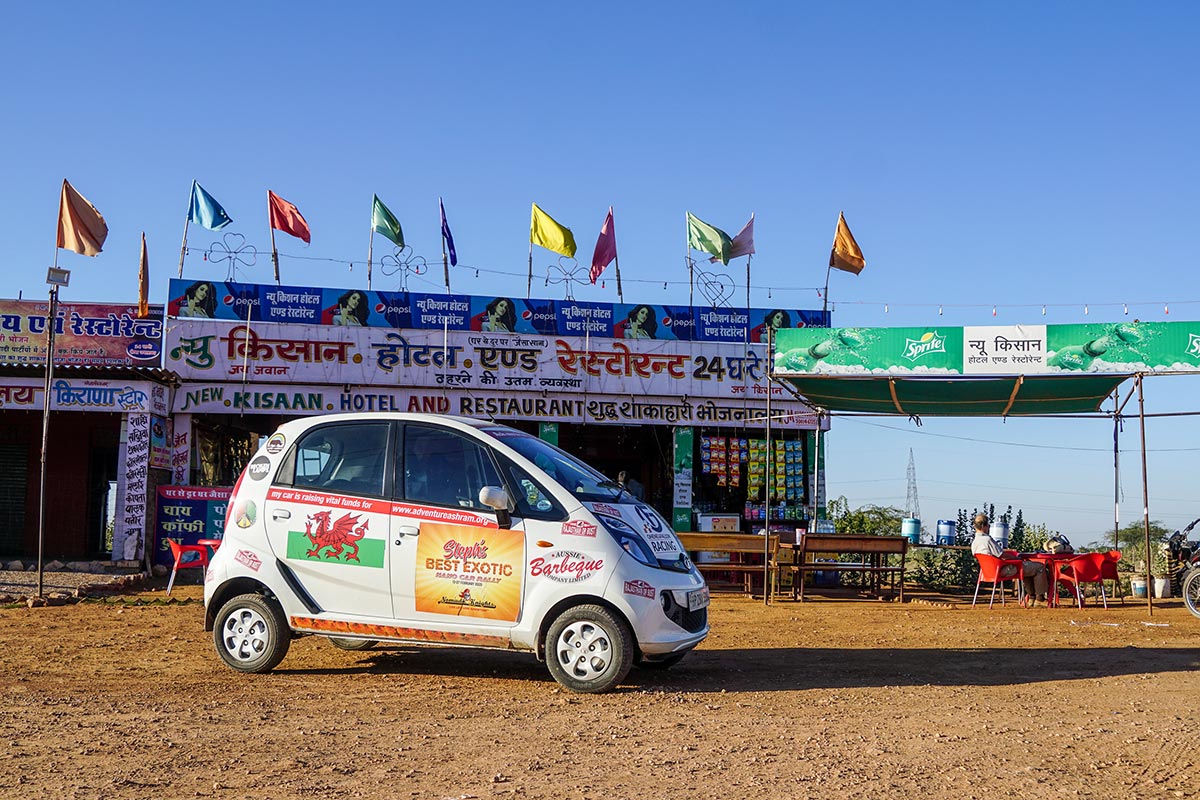 The fort is its centre piece and is a must visit place. People actually live inside it and are the true owners, it’s a fascinating story. We had dinner in the town, where there is no shortage of restaurants and chilled beers are aplenty. Just the ticket after a hot and dusty jaunt around the city.

A not so early start this morning as we headed towards the centre point of Rajasthan. It was our first big city so to speak and what a place it is. Jodhpur, the second largest in Rajasthan, is commonly know as the ‘Blue City’. This is due to many of the houses being painted blue.

Why, you ask? I’ve heard it said that it’s the best colour to repel mosquitoes and to keep the heat of the sun at bay. Regardless of the reason, it’s stunning.

The mighty Mehrangarh fort overlooks the city. However, the magic lies in the old city itself. With hundreds of shops, guesthouses, eating joints and vendors, it’s a bustling place, especially near the landmark clock tower and Sardar Market. 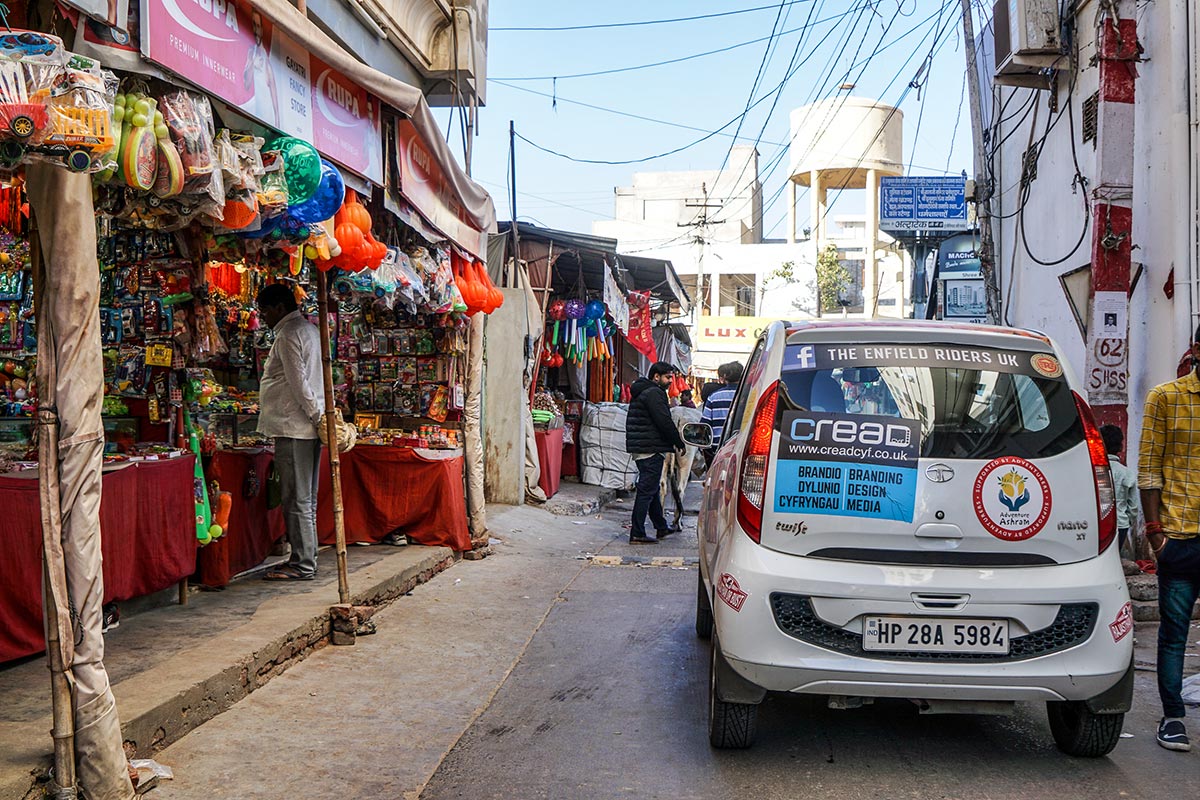 Everything about today was just brilliant. We jumped in a tuk tuk early morning and headed up to Mehrangarh Fort and Museum. It’s one of the largest forts in India. Built in around 1459 by Rao Jodha, it sits around 400 feet above the city. It’s a beautiful place and it’s so easy to get immersed in the history of the place as you wander round.

We then headed out across country through the most beautiful rural settings. You can see small children taking baskets of midday meals for their parents working in the fields beside their Sakia (Persian Wheel). Undulating ground, barren wilderness, date trees and terraced fields complete this awesome spectacle where life has not changed for centuries.

Our destination for the night, Ranakpur, hosts a magnificent marble Jain Temple, said to be the most spectacular in India. 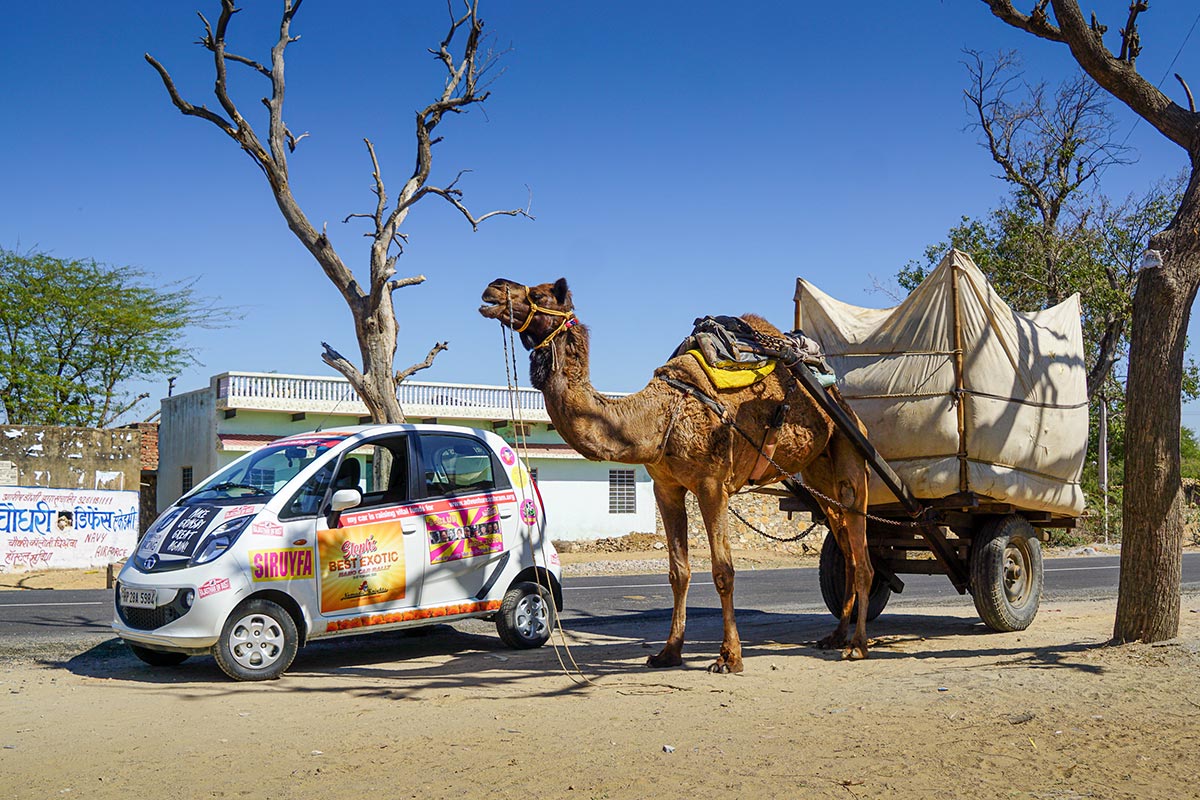 Where we stayed the previous night was within Kumbalgarh Wildlife Sanctuary, an area that covers 578 square kms. It’s home to many wild animals such as Wolf, Leopard, Sloth Bear, Hyena, Jackal, Jungle Cat, Sambhar and many more. I should also mention that it pays to be vary careful when choosing somewhere to swim. It’s best to stick to the hotel pool. In Rajasthan, crocodiles are everywhere.

We stopped off at the spectacular 15th century Kumbalgarh Fort. It’s a Unesco listed site and is surrounded by a massive 36km perimeter wall, the second largest in the world.

And that night, we stayed at the real Best Exotic Marigold Hotel!

We had an early start and long drive heading north east across Rajasthan. It’s actually India’s biggest state area wise and desert covers just over 60% of it. It’s possibly the only place in the world where you can blow your horn and the cows move off the road. 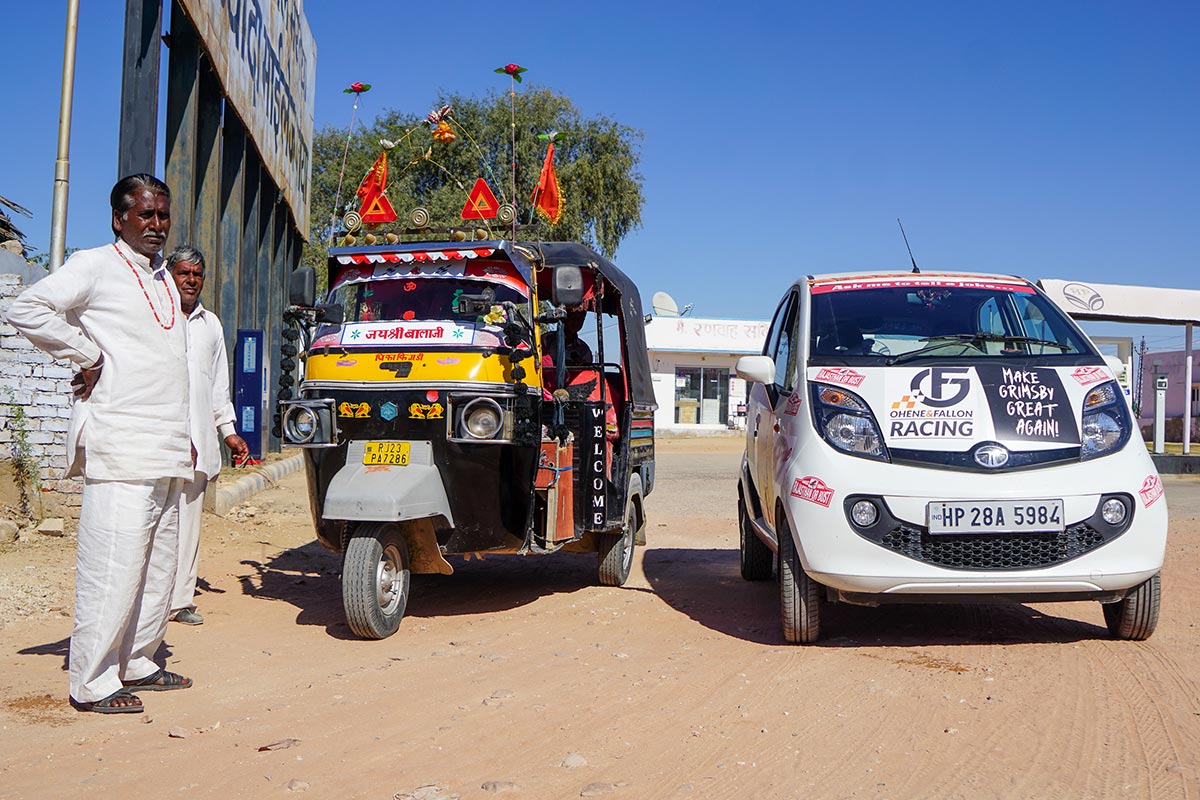 A tip though, always drive round the back of them as I’ve never seen one walking backwards.

Not yet anyway, but this is India. Anything is possible.

I am sure this was the day that everyone was looking forward to. I have lived and ridden all over India and I spotted a tiger for the first time on a morning safari in Ranthambore. A big female that had cubs. What an awesome experience.

We all headed out on an early morning safari as the chances of spotting a tiger in the wild at Ranthambore are amongst the best in India. Recent reports would suggest that there are around fifty two tigers in the park. The landscape is dominated by the formidable 10th century Ranthambore Fort. It’s a huge structure that contains ruined pavilions, splendid monuments, and three Hindu temples. Tigers are regularly spotted in the ruins. 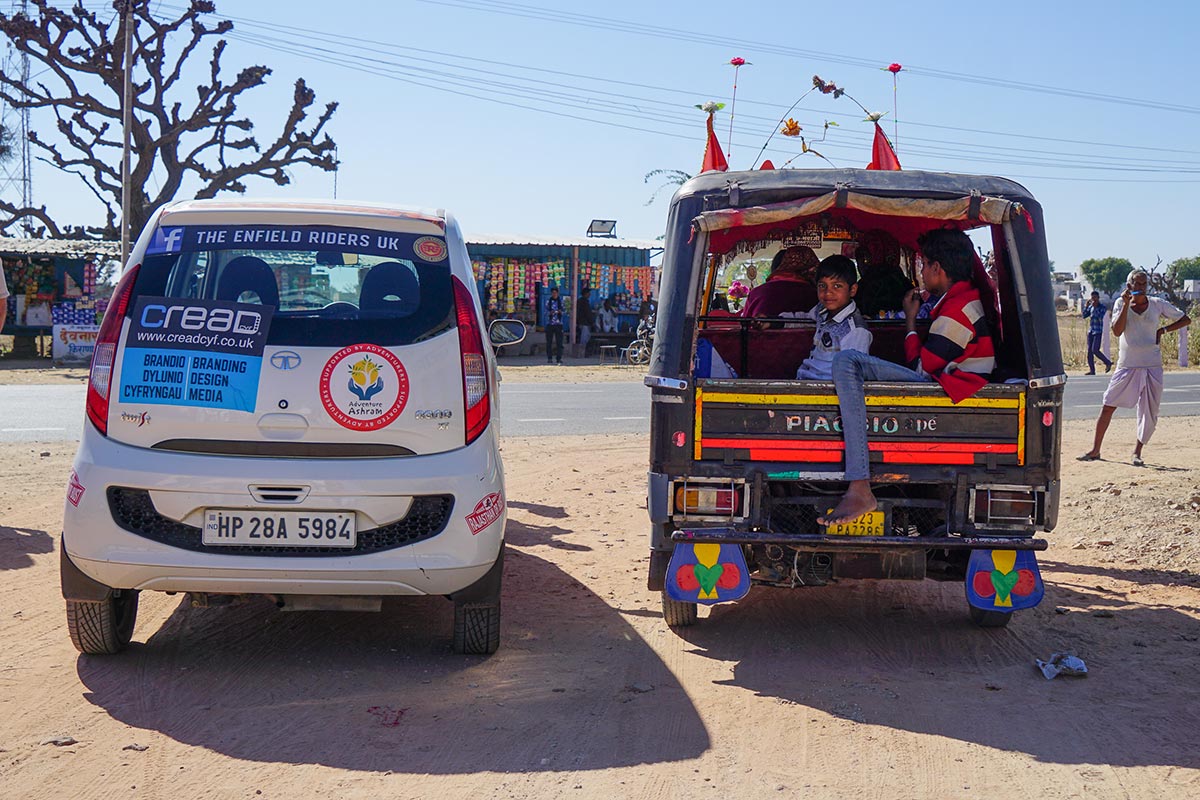 We left the national park and headed to the capital city of Rajasthan, Jaipur. It’s known as the ‘Pink City’ in reference to its distinctly coloured buildings. It has stunning architecture, fantastic food, great shopping, grand palaces and beautifully cultivated gardens.

It’s no wonder that Jaipur was ranked by Conde Nast as the 7th best place to visit in Asia. It’s a busy city and driving round it is an adventure in itself, it’s fascinating.

Getting out and about, chatting with the locals and walking along the pink painted avenues are really what makes Jaipur special.

The drive to Agra was entertaining to say the least. There were livestock, buses, tractors, pedestrians, motorcycles and trucks all competing for the same piece of highway. Our driving skills were truly put to the test.

It’s not uncommon to see packed and overloaded buses with passengers precariously perched on the roof. It’s looks dangerous, but it’s a way of life for many in India. 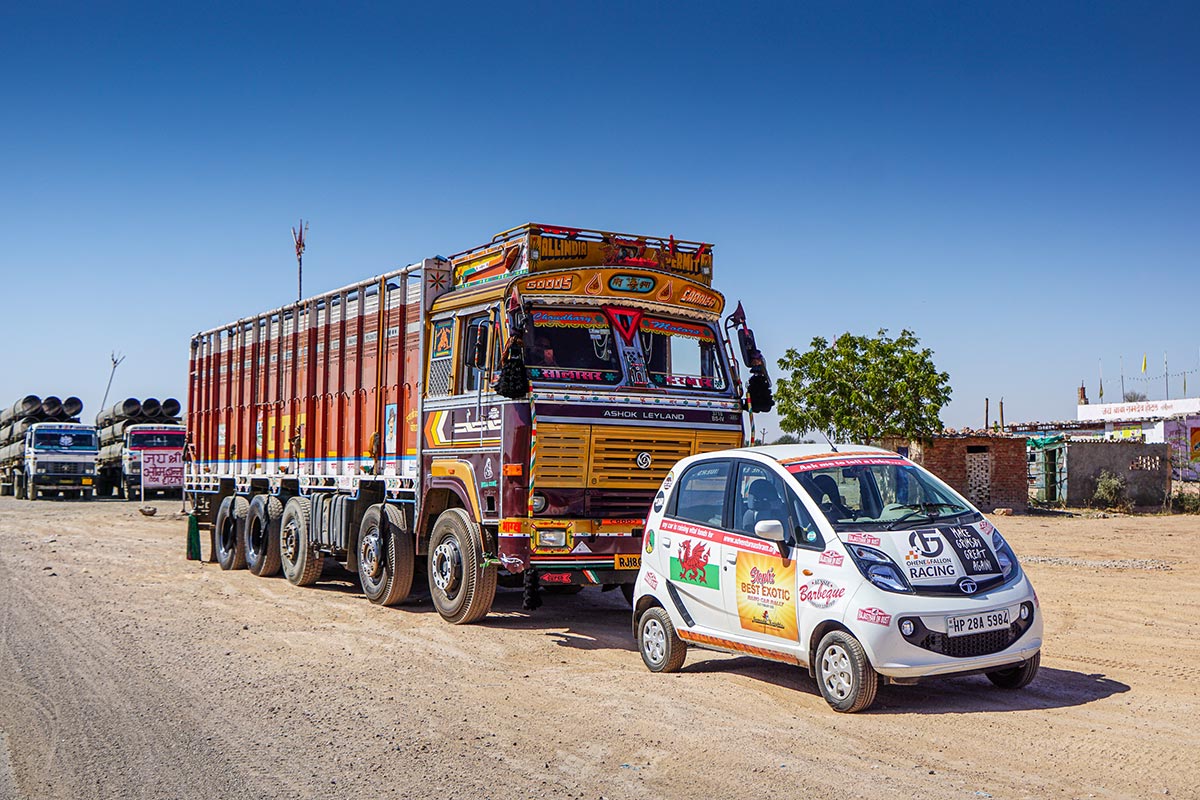 Known as one of the Eighth Wonders of the World, the Taj Mahal is widely considered one of the most beautiful buildings ever created. The exquisite marble structure is a mausoleum and an enduring monument to the love of a husband for his favourite wife.

It’s also an eternal testament to the artistic and scientific accomplishments of a wealthy empire. It is said that 20,000 stone carvers, masons, and artists from across India and as far as Turkey and Iraq were employed under a team of architects to build the Taj Mahal on the banks of Agra’s Jamuna River. They completed the epic task between 1631 and 1648.

It is set within lush gardens, complete with an enormous reflecting pool that regularly does what no human has ever been able to accomplish – duplicate the beauty of the Taj Mahal. 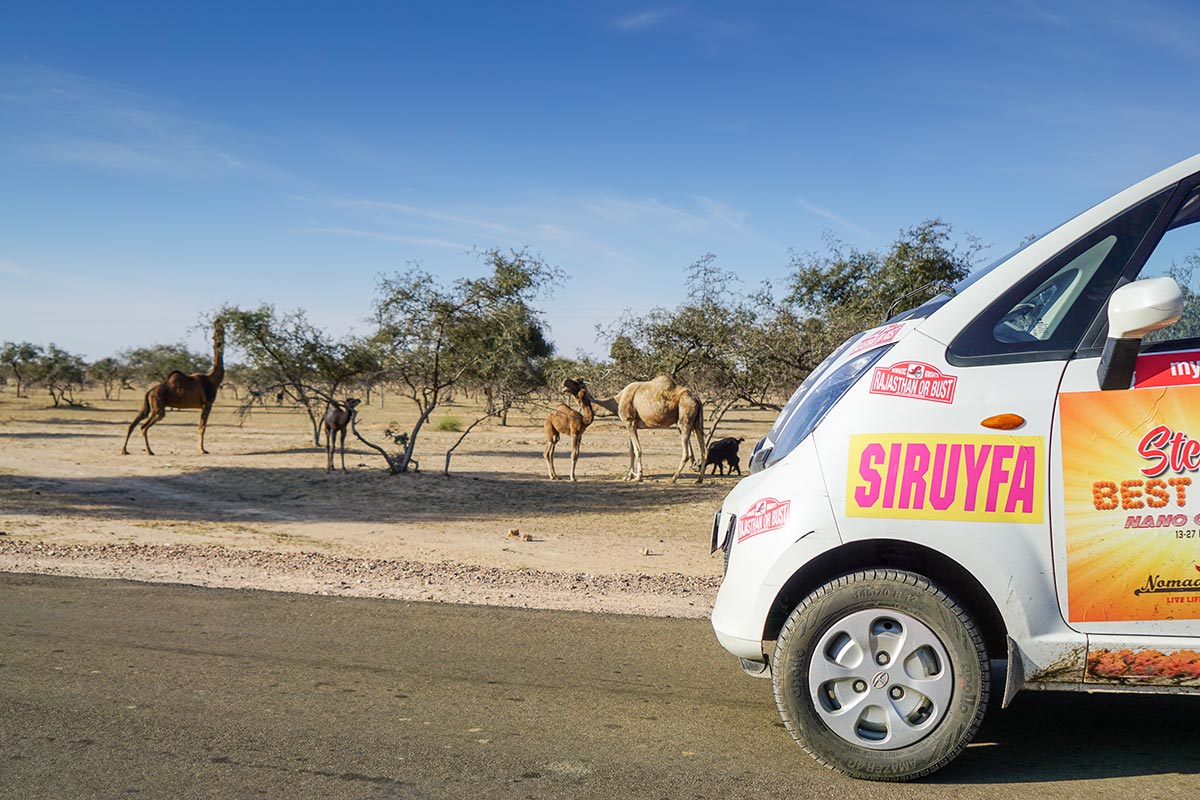 A car rally is about letting your soul fly free on a jet stream of steel and concrete. It’s about experiencing raw adventure on the open road and casting all your cares to the wind.

It’s certainly been all of this, and more!

It was our last day of driving as we headed back to where we first started, almost 2 weeks ago, and it was time to part company with our beloved Tata Nano. She has supported us loyally and without question, she’s never missed a beat. It’s been brilliant, no question.

Are you joining us?