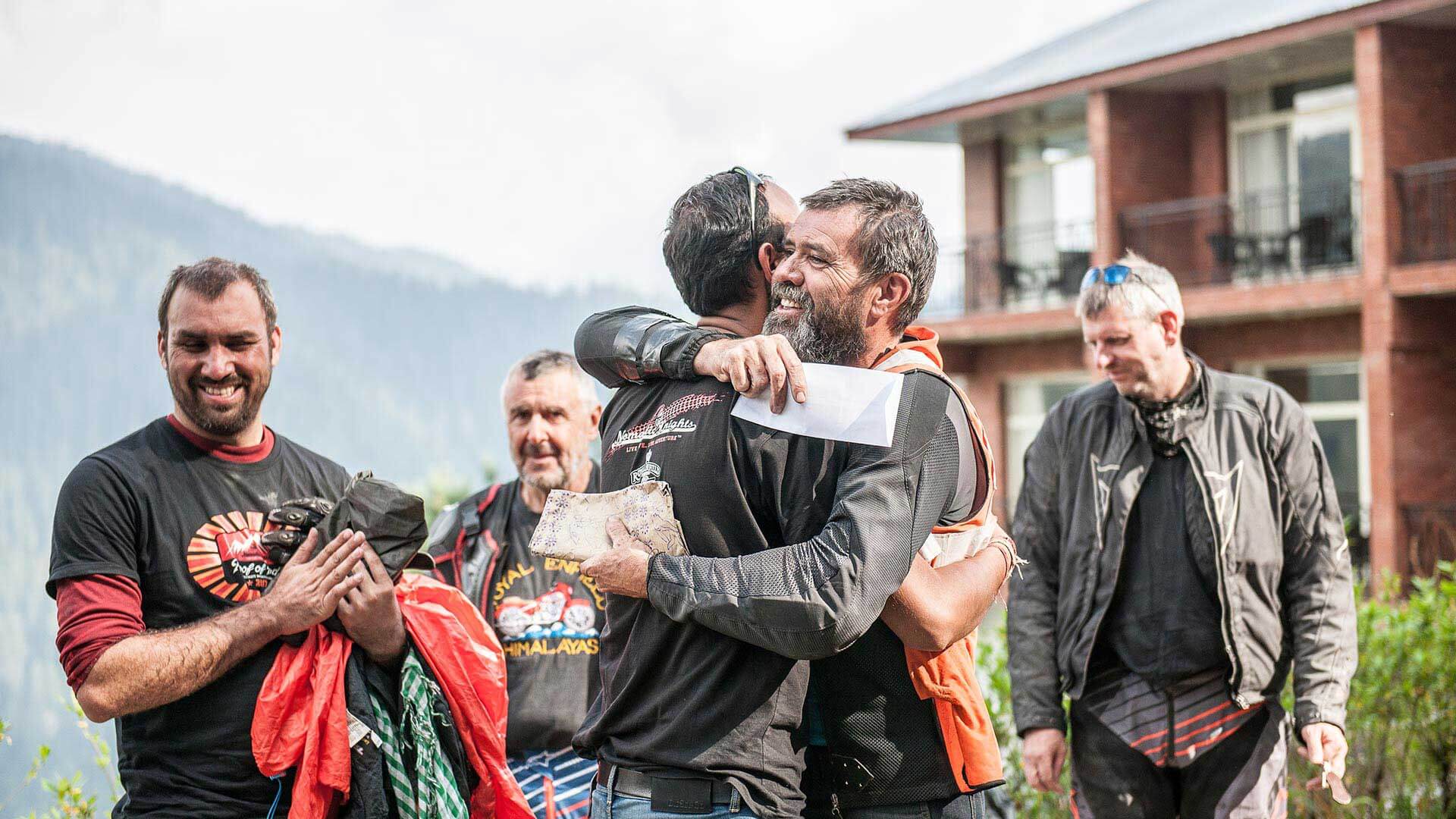 HOW IT ALL BEGAN…

In 2006, I was working full time in the UK. I owned a business and had all the toys – but I wasn’t close to feeling fulfilled. Then I came out to India for the adventure of a lifetime, and everything changed.

You can read my story below, or learn more about the unique experience we offer.

Put simply, Nomadic Knights Private Ltd is the motorcycle tour company I wished had existed when I first came out to India, in 2006. It’s my business and my passion, and we are constantly improving our tours, our fleet and our service.

My advice to you – from one rider to another – is to check for yourself. There are plenty of adventure travel companies, but they aren’t all the same. Many act as agents or middlemen. Many aren’t even located here.

We are different. We’re a long-established business with a full-time team, our own fleet, and intimate knowledge of these countries and cultures. That includes an extensive support network across the country.

But that isn’t the main difference.

When you ride with Nomadic Knights you are riding with me – Alex.

I lead every ride from the front, in sun, rain or snow. I’ll be here to meet you when you arrive … and will see you off at the end. I’ve ridden over a quarter of a million kilometres, completed over 100 guided motorcycle tours and have led over 2,000 people.

That means you’re covered every step of the way. No agents. No middlemen. No bald tyres or bad brakes. (I’m a mechanic by trade, so nothing gets past me).

I’m from the UK and understand the kind of service you expect. This is critical when westerners travel to places like India, Nepal, Tibet and China.

I‘m there to make sure that you get what’s promised.

Of course, Nomadic Knights isn’t for everyone. We ride together. We eat together. We share drinks and stories and laughs together. It’s wonderful to watch people remember what it is to really be themselves … but these are real adventures. Some days aren’t easy.

On the other hand, if you’re like me, they can also be the best days of your life. (Browse our amazing Ride Photo Books to see what I mean.)

(If you’re interested to know how I got here, read My Story below.)

I lead every ride, but I’m backed up by a dedicated team of mechanics, medics and local contacts. These guys are experienced experts who shadow us 24/7.

You never quite know what’s around the corner – that’s just how it is when you ride in India, Nepal or Tibet. But there’s one thing you can be sure of – our motorcycle tour company has been around long enough to have seen just about everything.

If you have any questions, get in touch.

Do you remember your first ride?

That rush of acceleration. That feeling of freedom. Mine was decades ago. I was eight years old. A skinny kid on a motorcycle that was way too big for me. But riding felt like an escape – and I needed that.

I grew up in Central Scotland. A tough town. Docks, heavy industry and gangs on the streets. You know the kind of place. No money. No opportunity. Not much to do except hang about and cause trouble. I barely knew my Mum until I was five. She was Catholic. My Dad was Protestant. Life was volatile – on and off the streets.

I learned to watch my back and read people fast.

Sometimes – when things got bad at home – my sisters and I would be split up. I didn’t mind. We’d get taken to a quiet fishing village in the North. A different world. Free of the concrete and chaos I had space to think. I connected with nature. The land. The sea. The sky. 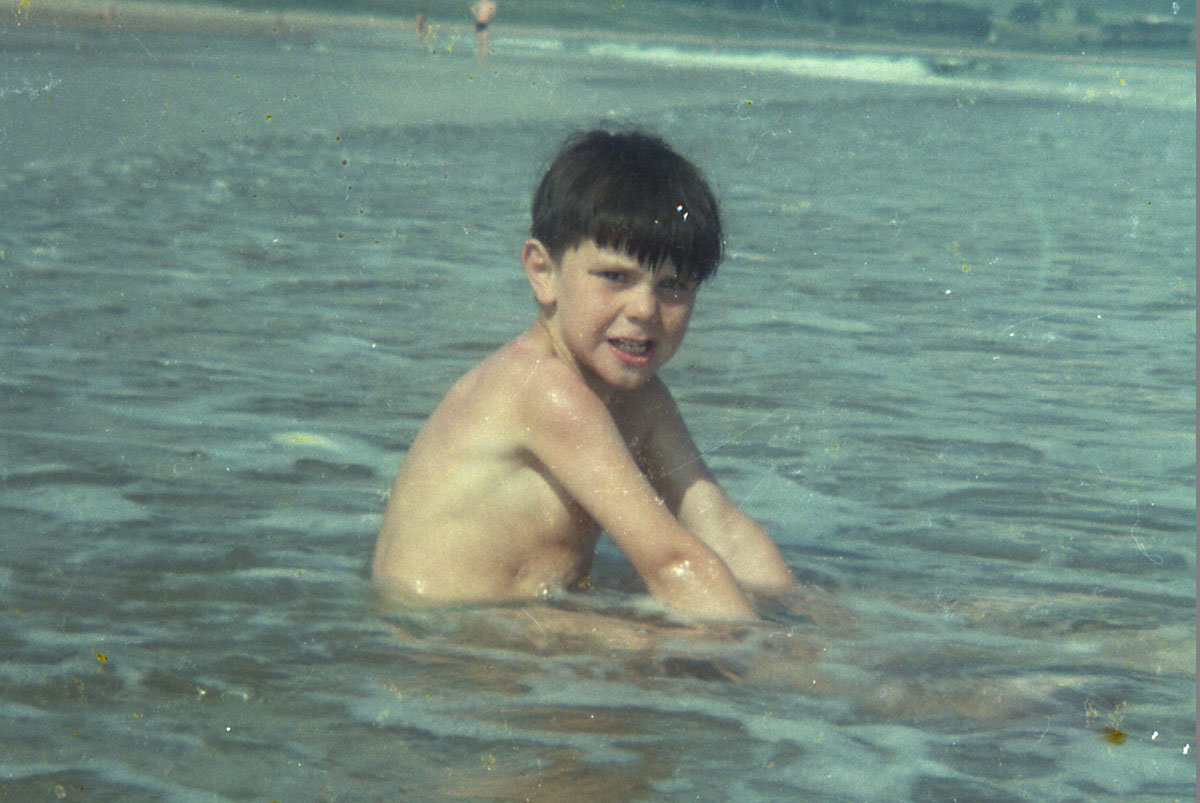 I remember this photograph being taken. It was 1968 and I was 5 years old. It was the North Sea and my dad was teaching me how to swim. And sink and panic as it turned out.

And I learned things from those who lived there. Self-reliance. Resilience. Grit.

My Dad wasn’t quiet. He was a wild man. He’d spent time in the forces. He used to tell me about his time in India – riding motorcycles. ‘An adventure’, he said.

I was the youngest of five, and the only son – so I was the one he taught to ride. The motorcycle was a second-hand Honda Step Thru. 50cc … and it felt like a rocket.

He realised his mistake when I started riding around the estate without permission. It didn’t matter how often I was caught. I was hooked. Nothing else made sense to me – least of all school.

Eventually, I was loaded into a big, tense comprehensive school. It felt like a thousand people were watching me – looking for an excuse. I don’t regret that time. I learned how to deal with change. I learned how to talk my way out of trouble or stand up for myself when that wasn’t enough.

But one thing didn’t change. I never cared about any of the stuff I was supposed to be learning at school. I knew what I wanted, and it wasn’t history or algebra.

My teachers agreed. They expelled me for truancy when I was fifteen.

In time, I became a mechanic. It started with cars, but later I got work servicing JCBs, HGV’s and other construction machinery at a plant hire firm. 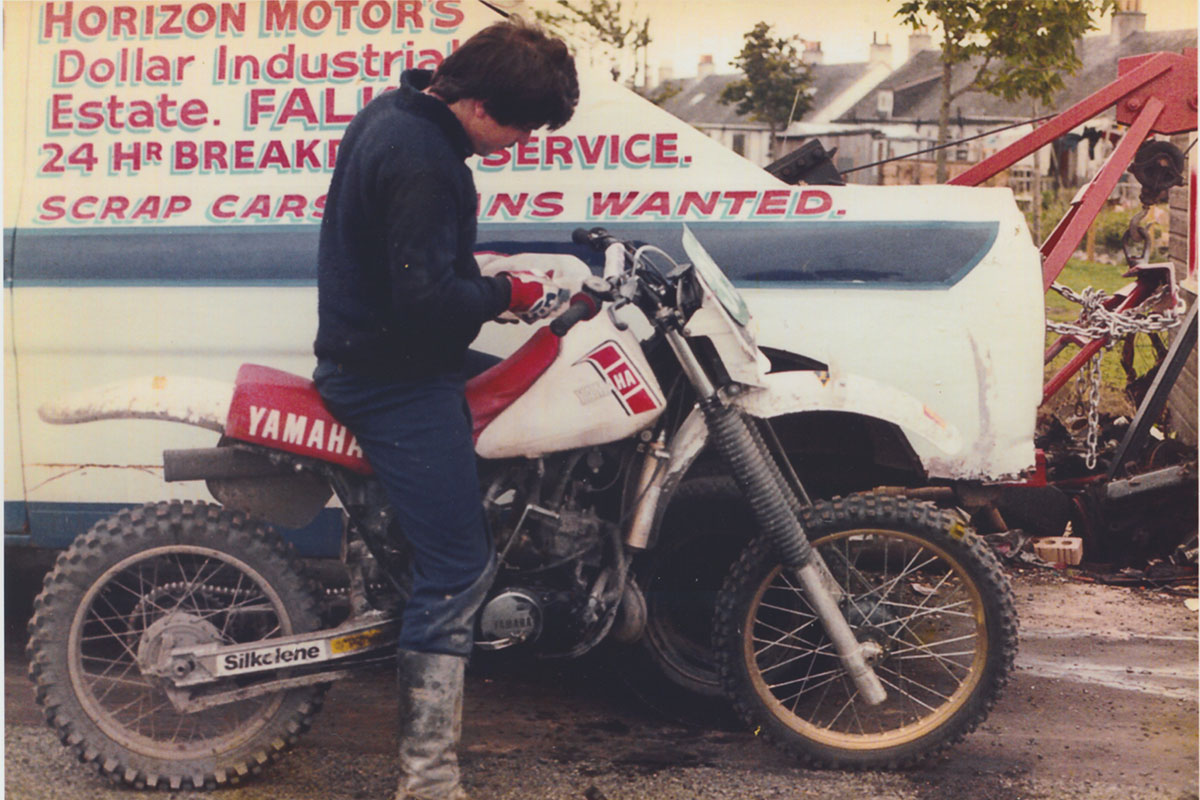 This was taken in 1983 and I’d just turned 20 I think. I loved this motorcycle, it was the first brand new one that I could afford. A Yamaha YZ250.

I had no academic qualifications, but the owner liked the way I handled myself and gave me an opportunity. As the years went by I got constant promotions. First to sales and then to management. By 1992, I was earning 3 times as much I would be on the tools and moonlighting three nights a week as a rave DJ. (But that’s a whole different story).

I was still obsessed with motorcycles. Road bikes. Motocross Racing. Modifying. All of it. But I was looking for more.

In 1994, with fifteen grand, I started my mobile phone business. It was hard work, but I put my head down and powered through it. One year. Two years. And on and on. The business grew and grew. Right place. Right time.

A decade went by. I did the whole corporate thing. The staff. The stress. The parking space with my name on it.

By 2005, I had all the stuff I was supposed to have. Various properties. The relationship. The cars. The motorcycles. The luxury apartment in Spain. The jet-skis.

But it wasn’t enough. I never felt satisfied, something was missing.

Then I saw an advert for a ride across India on a 350cc Royal Enfield. A hard ride. An epic adventure. I booked it on the spot.
This was 2006, and it changed everything for me.

India was extraordinary. Raw, beautiful and ugly all at the same time. Epic people. Epic landscape. For the first time in thirty years, I reconnected with nature. The land. The sea. The sky. 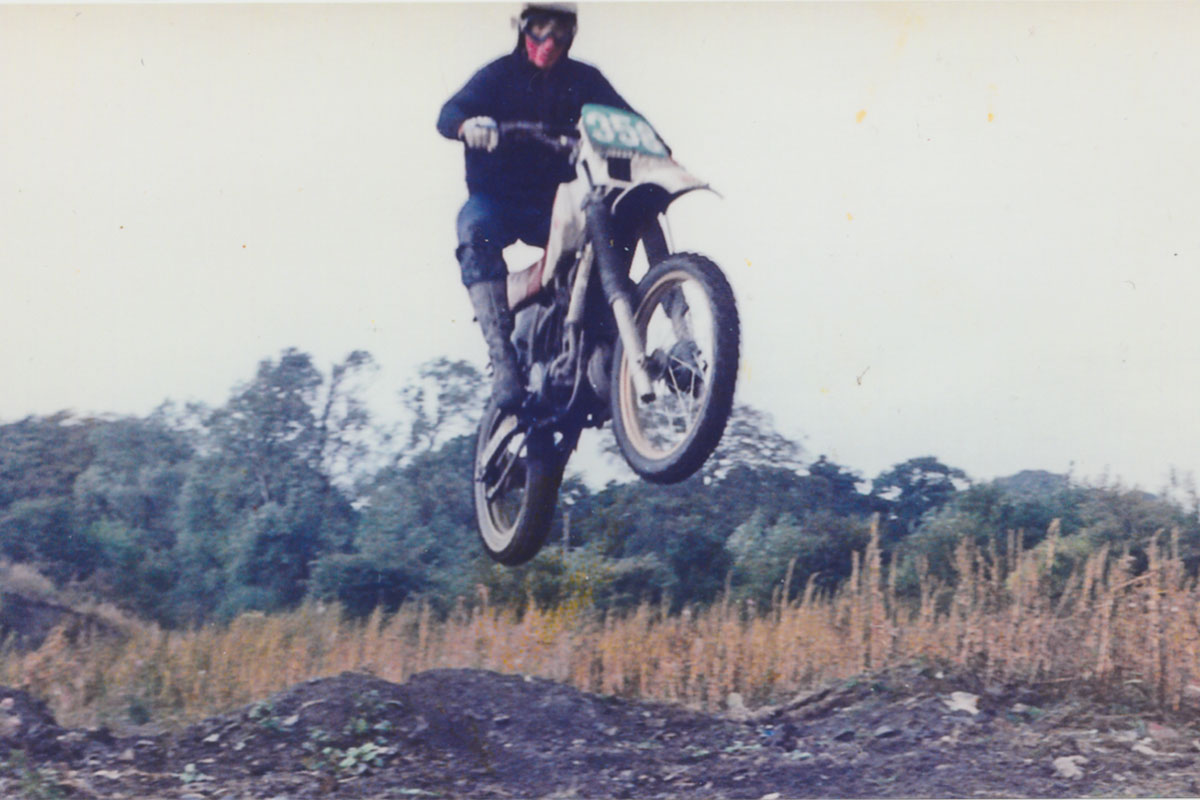 Another photo from 1983. I got a bank loan for this motorcycle and paid it up over 2 years. It felt like forever, especially when I missed a payment. Double the next month.

It felt like the first time I’d ridden a motorcycle. That rush of acceleration. That feeling of freedom. It felt really connected.

Coming home wasn’t good. I saw my world for what it was. Wrong in every way that mattered. Somehow I’d bought into someone else’s dream. I had their house. Their relationship. Their cars. Their motorcycles. Their holiday home and their fucking jet-skis.

It was like I was eight years old again – needing to escape.

I went back to India in 2007. Another adventure. Another trip home. By then, I knew the truth and it was uncomfortable. I didn’t like my life anymore.

Change isn’t always easy, but six months later, I felt free. No business. No relationship. No ties. Then the UK company who ran the motorcycle tours asked if I wanted to go out to India to lead their rides.

The pay was peanuts, but it wasn’t about the money and I jumped at the chance. For the first time in my life, I was doing something I truly loved.

It wasn’t just about riding. I tuned the whole experience. Motorcycles. Mechanics. Hotels. Restaurants. Every piece of it matters.
You know that feeling when you’ve ‘earned’ your bed. Not from endless emails or meetings – but from living. That’s how I felt every day. Bone tired and content.

And it lasted five amazing years. I rode motorcycles, led people on life-changing adventures … and met a beautiful woman who is now my wife. I felt reborn.

Then the UK company went bust, and it all fell away. 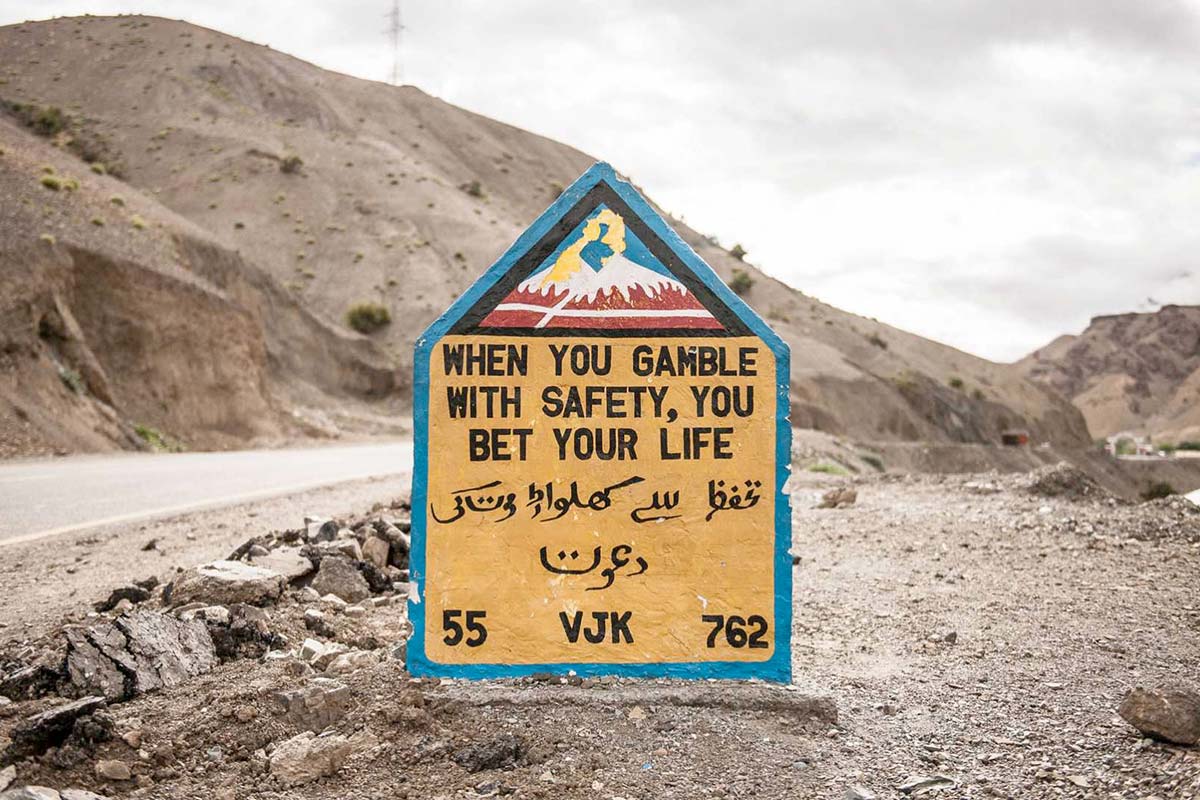 There are moments when we’re tested. You know what I mean. Sometimes there’s only hard roads and hard choices.

This could have been one of those times – start something new or go home.

Except that India had seduced me. The beauty. The ugliness. The epic landscape. It was my home. I had a life and a future that I wanted. And I knew I’d never get this chance again.

That’s when I set up Nomadic Knights. A simple dream. Be the best there was. Be the ‘Go-To’ guy for the once-in-a-lifetime-adventure.

At first, it wasn’t easy. There’s a reason I’m the only foreigner doing it this way … running tours from the front. The average motorcycle in India has bald tyres and bad brakes. The average hotel room is dingy and small.

Nomadic Knights needed to be better. I understood what my riders would want. Our own fleet of motorcycles. Hand-picked adventures, hotels and mechanics.

Starting was tough. There were times when I almost gave up, but the lessons I’d learned had stayed with me. Self-reliance. Resilience. Grit.

And the first ride gave me inspiration.

I led every ride from then on, and each one was different. Some riders come alone. Others come with friends. But by the end, we always felt like one big family. Eight years later, the business has grown beautifully, but the DNA has stayed the same. 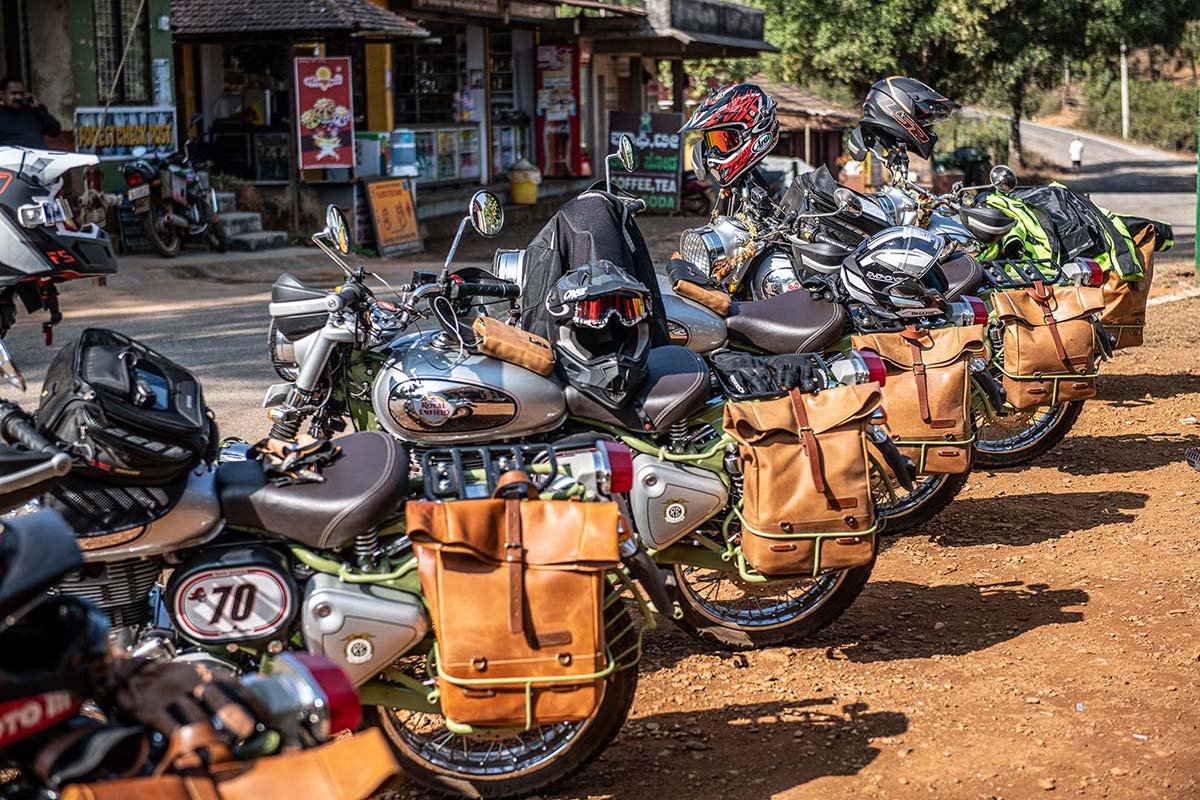 I still lead every tour. We get CEOs and barbers, bankers and mechanics.

And it doesn’t matter.

We ride together. We eat together. We share drinks and stories and laughs together. It’s wonderful to watch people remember what it is to have fun, to really be themselves … to be part of something truly epic.

These are the times you’ll remember. The moments outside your comfort zone. THIS is why you came. THIS IS THE JOURNEY.

And on the other side is Mount Everest, or wild Elephants or the Arabian Sea.

If it doesn’t challenge you, it won’t change you.

At Nomadic Knights these are more than just words.

Our tours aren’t for everyone, but that’s really the only question you need to ask yourself. Are you ready to be changed?