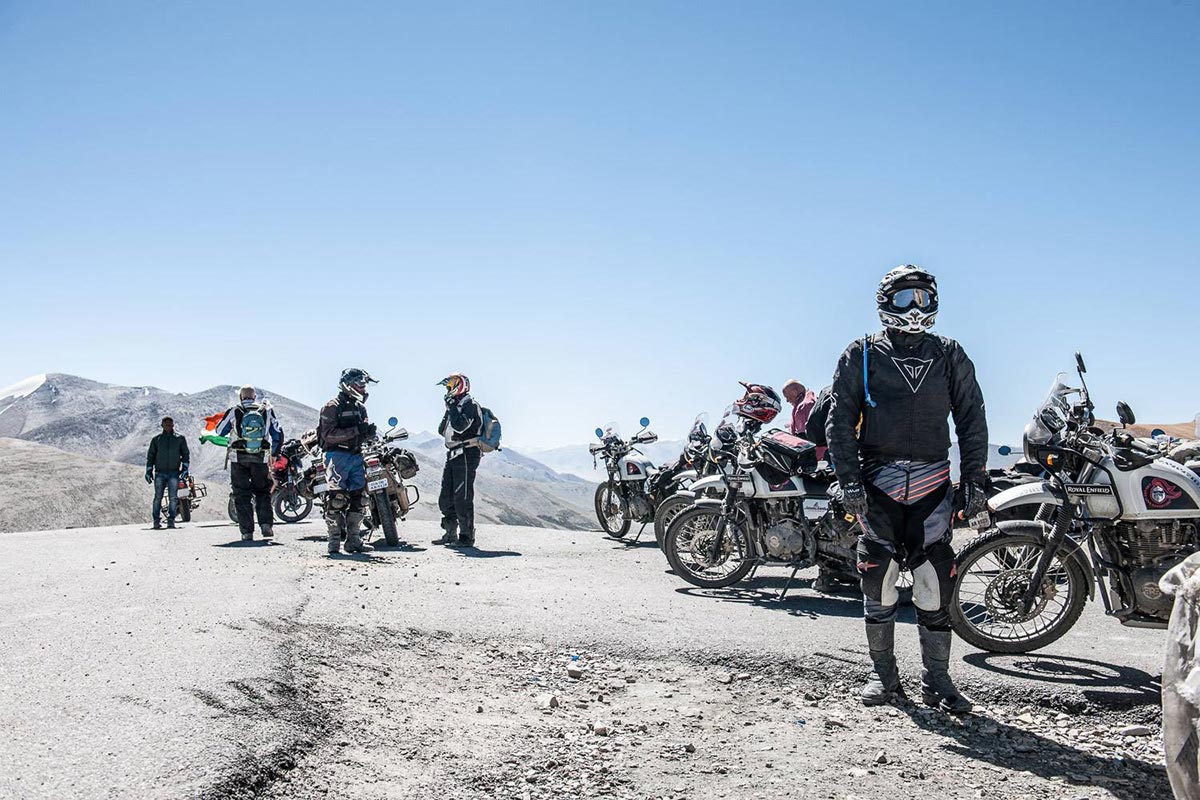 After a three day drive to Narkanda, I arrived in Shimla, where I would stay for three nights. This was our base for the next two months almost, and it felt a bit like coming home as I have made so many friends over the years. Some of the riders arrived in Narkanda on Friday and the remainder on Saturday.

After a fantastic breakfast and morning briefing regarding riding in India, I introduced the group to the motorcycles that would be theirs for the duration of the tour. I took them for a short warm up ride on forest tarmac roads, allowing them to get to know their Royal Enfield Himalayans a bit better.

The truck was loaded with all we needed: spare parts, extra fuel, and all our luggage. We set off into mountain wilderness, heading for Tatapani. We rode past the River Sutlej, which is the longest of the five rivers that flow through the crossroads region of Punjab in Northern India and Pakistan. Tatapani is famous for its hot sulphur springs, which are said to offer therapeutic healing from fatigue or joint pain. Perfect for weary motorcycle riders. 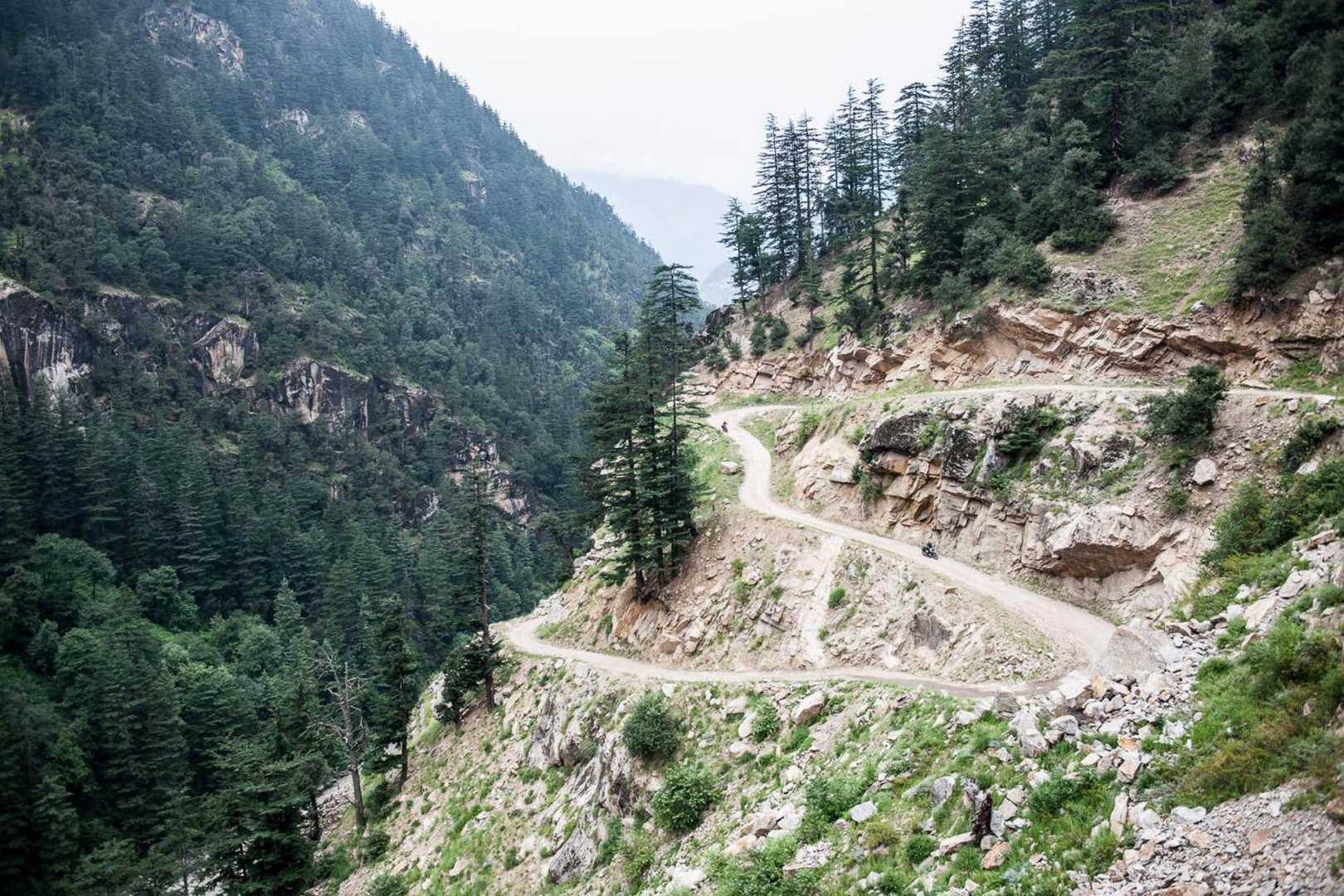 The ride out of Tatapani was quite fascinating as we headed along alpine forest tarmac roads, cut straight out of the mountain. Some of the roads were quite narrow so I reminded the group to use their horn on blind bends and when riding through villages. We eventually dropped down to the River Beas, which marks the eastern-most border of Alexander the Great’s conquests in 326 BCE. Then, we rode on long, sweeping blacktop all the way to Manali.

We set off for a beautiful ride up into the snow-capped mountains that loom over the Kullu Valley, famous for its temples and beauty. The hills were covered with pine and deodar forests and apple orchards. We were heading for the Rohtang Pass, which (translated literally) means “Bed of Corpses”! Looking out for landslides and water crossings was the order of the day, as road conditions can be so unpredictable due to weather.

For the next three days, we rode on a remote route alongside the Chenab river that, to my knowledge, no other motorcycle adventure company has tackled. Our support trucks ran ahead with tents, cooks, helpers, food, generator, drinking water and firewood. Our only stopping point was at our self-made tented camp high up in the mountains. This was a real adventure experience: camping in the mountains, with no hot showers, and the only luxury a cold, refreshing bucket of water. 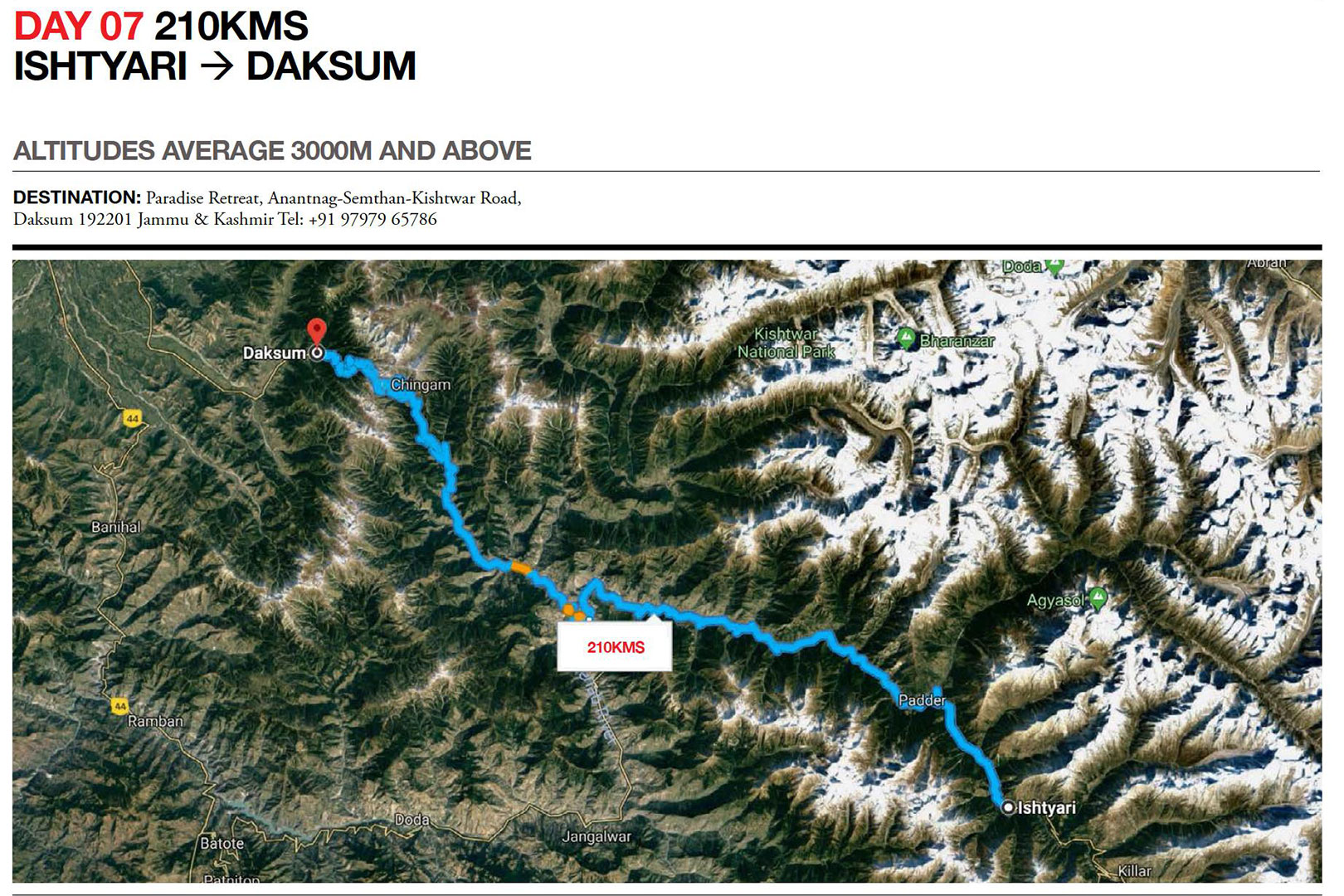 This was the ride everyone was waiting for: the Cliffhanger! The road is one of the most dangerous, scary and exciting roads in the world. Starting in Killar and ending in Kishtwar, this lonely road a true test of your vehicle and nerves – one wrong move and you could be hanging off a cliff, literally. Riding in the summer, it was difficult to imagine that the area is completely covered by over four metres of snow during the winter. Animals like yak, ibex, brown bears and snow leopards roam across the wild land.

Moving away from remote riding, we arrived at the bustling city of Srinagar and enjoyed hot showers, cool beers, fabulous food. We went on a Shikara ride around the Dal Lake, seeing the beautiful floating gardens on the calm waters. At the end of the day, we stayed in luxury houseboats, relaxing in our soft beds after a long journey. The Kashmiri people were very friendly and hospitable.

After a perfect day, we were back on the motorcycles as we ascended the long, winding mountain roads towards Sonmarg and over the spectacular Zoji La pass (at over 3500 metres). We rode alongside the River Indus, one of the longest rivers in Asia, which provides key water resources for Pakistan’s economy. There were numerous Indian Army check posts along this ride, so we always had to have our documents ready! 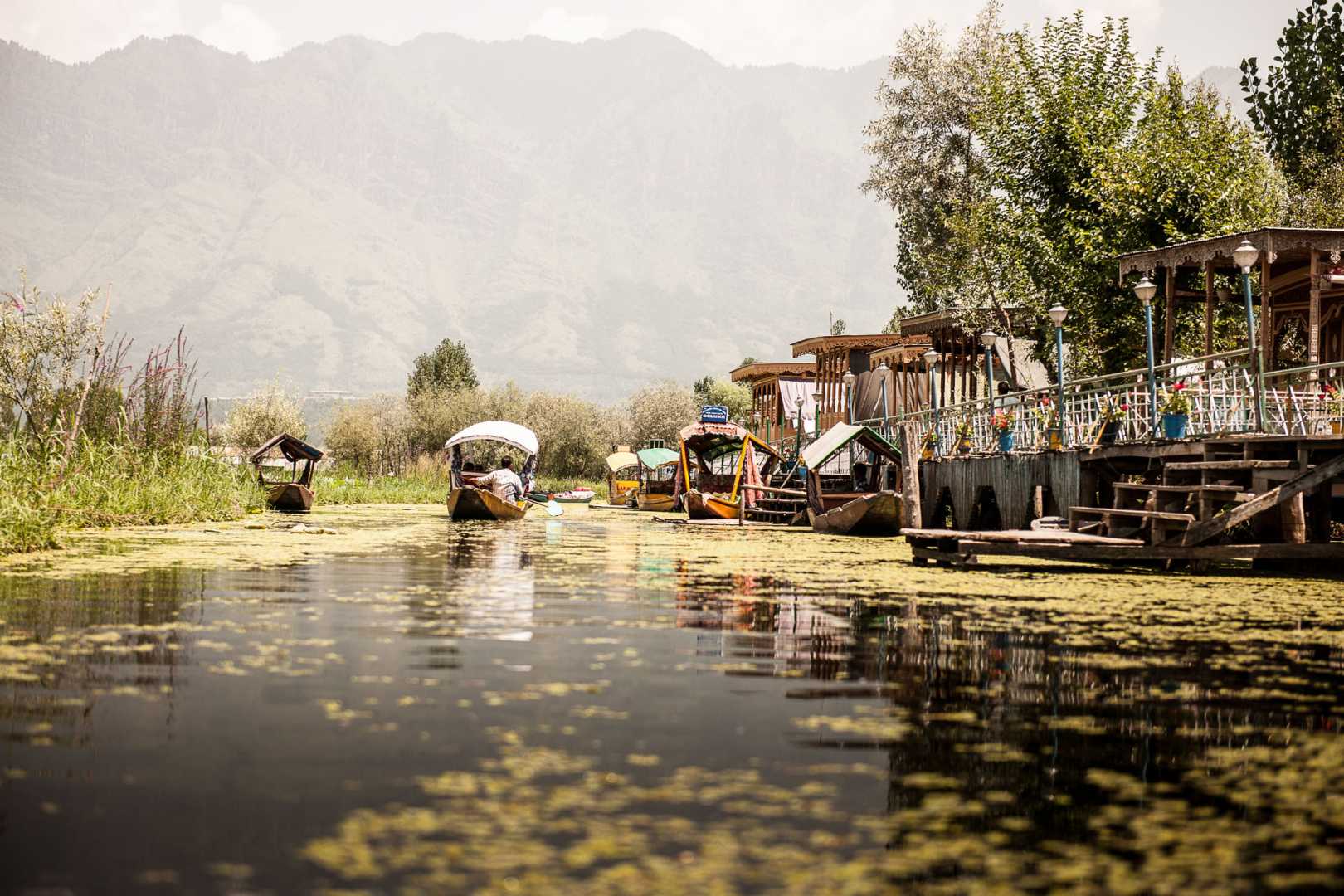 We travelled further along the River Indus on smooth roads maintained by the Indian Army. These were possibly the best riding conditions in India, with winding tarmac twists for long periods of time. The group could really enjoy the handling of the Royal Enfield Himalayan and settle into a relaxing riding groove. In the background, we had the Karakoram range looming over us, the second highest mountain range in the world, part of a complex of mountain ranges that includes the Himalayas.

On our rest day in Leh, we shopped and wandered around the city, sightseeing and stopping to enjoy the local cuisine at cafés and restaurants. Men had the option of getting a wet shave with an open cut throat razor at the local barbershop. No riding for a change; we just allowed ourselves to be tourists.

We had a lovely early morning ride out of Leh on winding tarmac roads, crossing the border from Jammu and Kashmir back into Himachal Pradesh. We traversed the second and third highest motorable roads in the world, at well over 5000 metres. In the evening, we camped under the stars, gathering round the bonfire for drinks and songs to keep us warm in the cold night. 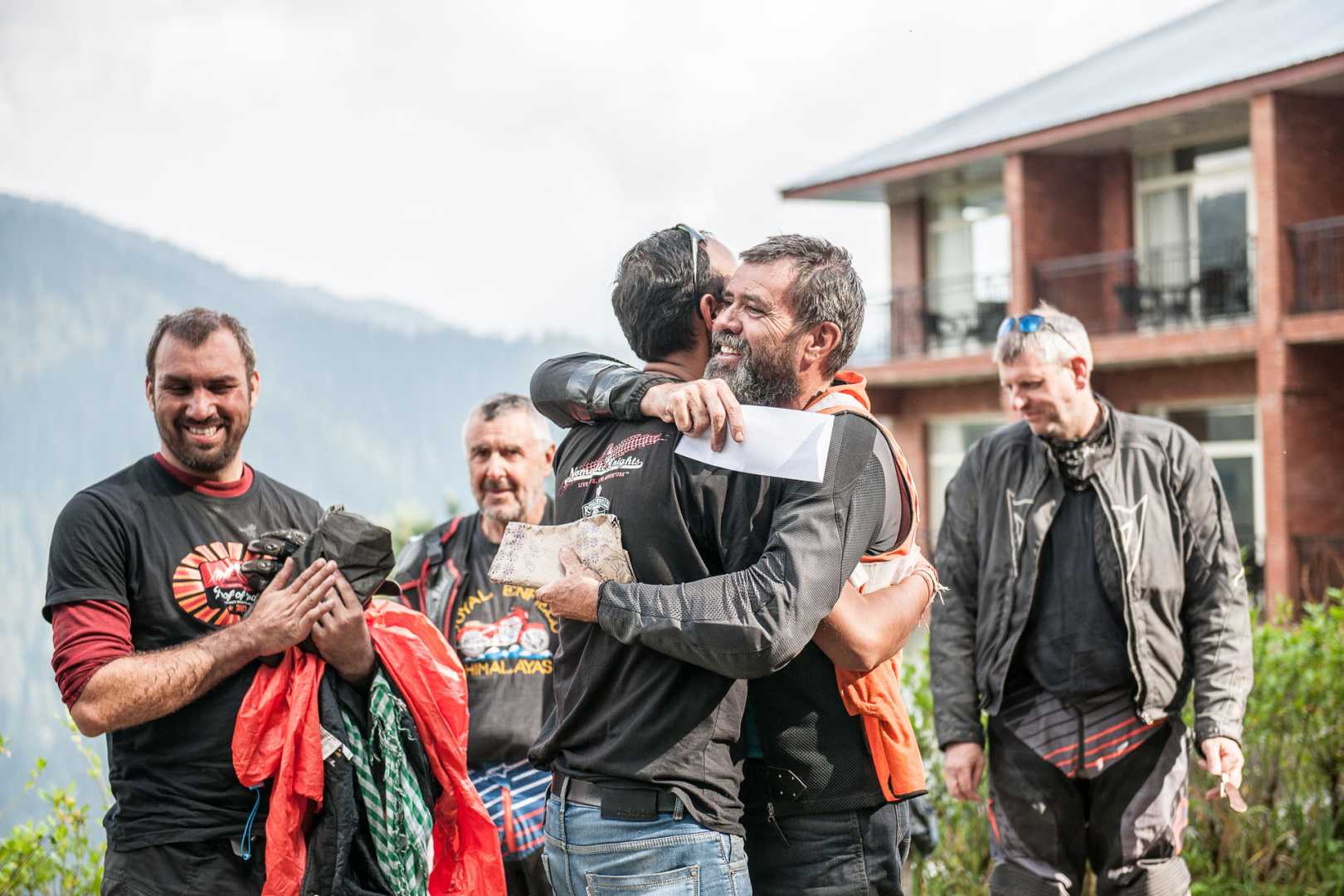 Today we crossed the Rohtang Pass again. You’ve been there, you’ve seen it, you’ve beaten it. If there are ten top things to do in life, then this is one of them. We stopped at the top and met a few other bikers doing the same as us, laughing and shaking their heads. We do it because we love it, why else?

We had an early start for our last day of riding as we headed back to Narkanda, over the stunning high forest Jalori Pass where we stopped for lunch at the top. It was apple growing country. It was a surreal experience to ride through a 3km long mountain tunnel that goes uphill, downhill and around corners. It makes you feel alive. We had mixed riding conditions, going from wide flowing mountain highways to tree covered forest trails. In the evening, we had a bit of a party to celebrate the end of the journey, sharing our amazing experiences, funny moments, and a few beers…

This was it: the end of the road. After a delicious breakfast, we boarded our vehicles and headed to Chandigarh airport where the group connected with their flights.