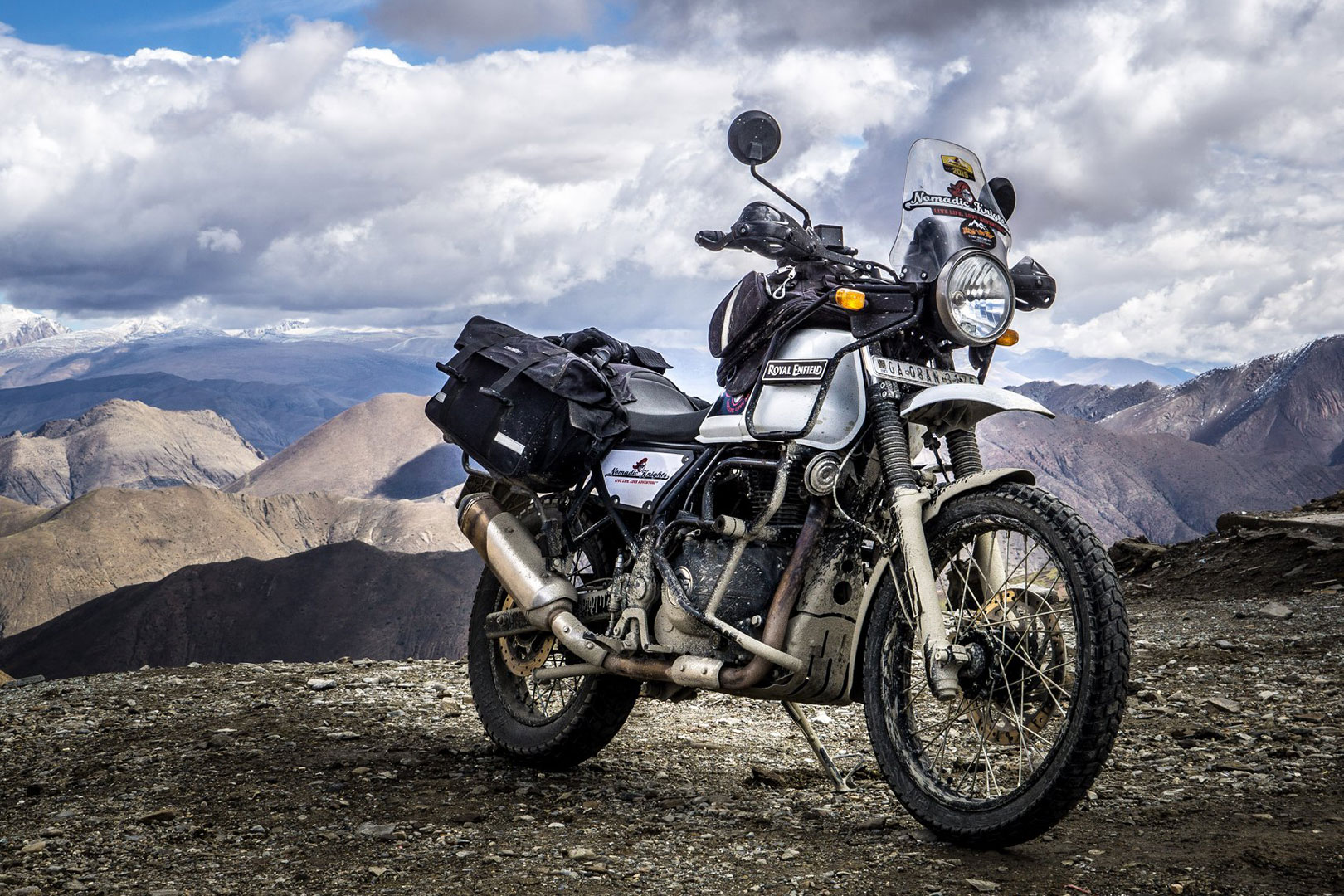 The ladies started arriving in Kathmandu ready for the ride to Everest Base Camp. We got together in the hotel reception to gather paperwork and meet and chat with other riders about what lay ahead.

Our agent applied for our Tibet Group Permit at the Chinese Embassy today, which would be delivered to us before we set off for the border in a couple of days. There’s lots to see and do in the frantic city of Kathmandu. Whether you’re barrelling through the traffic-jammed alleyways of the old town in a rickshaw, marvelling at the medieval temples or dodging trekking touts in the backpacker district of Thamel, Kathmandu is an intoxicating, charming and exhausting place.

Some of us took a stroll through the backstreets, Kathmandu’s timeless cultural and artistic heritage revealing itself in hidden temples overflowing with marigolds, courtyards full of drying chillies and rice, and tiny hobbit-sized workshops.

This endlessly fascinating and sometimes infuriating city has enough sights to keep you busy for a week, but we had a ride to do.

We prepared for the long days to come by taking a short ride out around midday into the busy traffic and splendid countryside up around the beautiful forested hill station of Nagarkot. We got some hot tea and local snacks while we were there. Everyone was able to get acquainted with their Royal Enfield motorcycle, which was theirs for the duration of the ride. 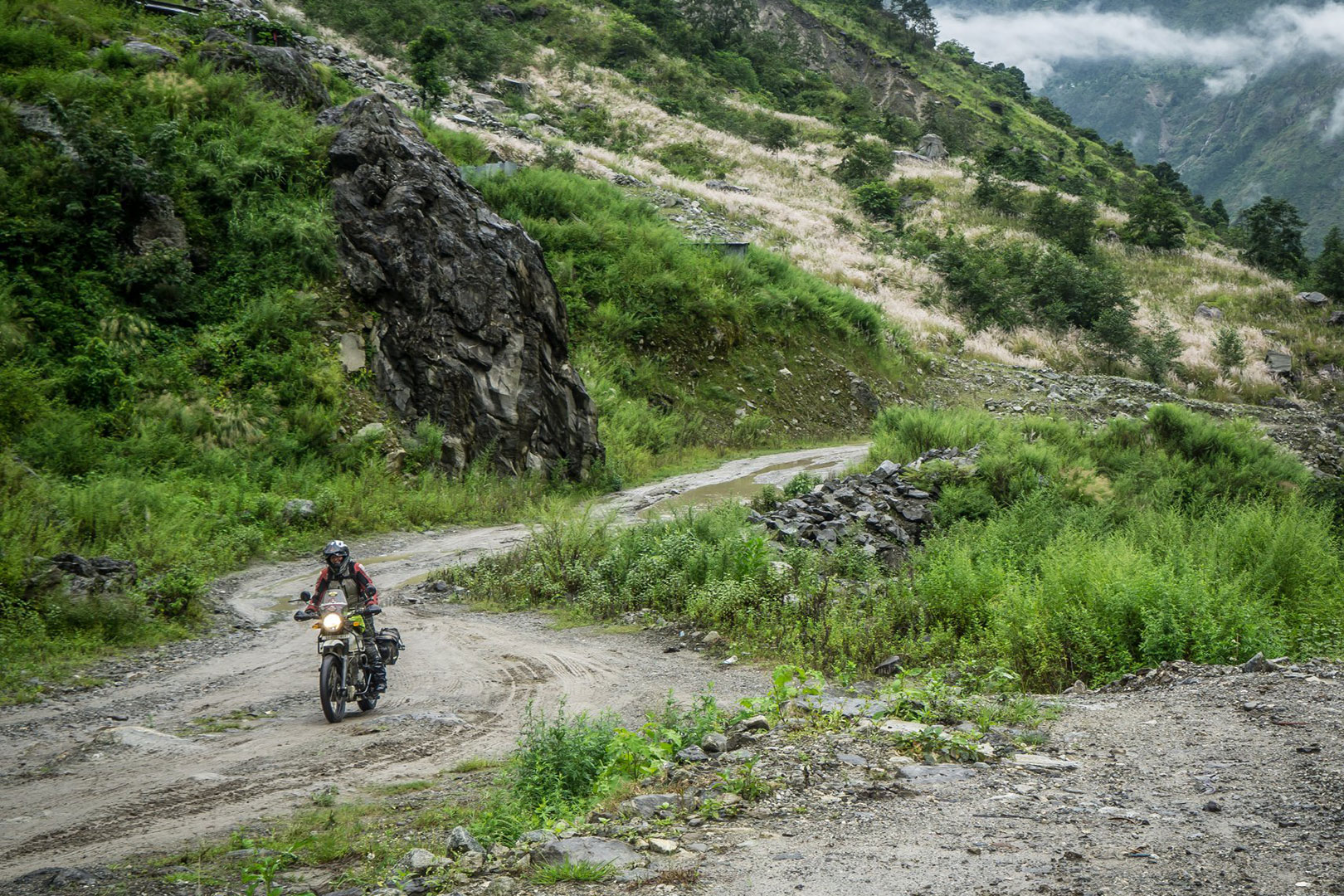 Collecting our Tibet Group Permits, we rode out of Kathmandu for the beautiful but challenging route alongside the Trishuli River up towards the Nepal/Tibet border at Gyirong. We spent the night on the Nepal side of the border in amongst the rich and dense jungle area of Langtang National Park.

We were up for an early start to a long day. After completing our customs and immigration formalities we headed on to our destination of Tibet on roads with incredible views. We headed up over our first high pass where we were able to see Mount Everest in the distance. We rode on a sweeping and starkly beautiful valley with many dips and crests before dropping down to New Tingri.

Due to landslides caused by a particularly harsh monsoon season, some of the riders didn’t make it into Tibet. Riding there took a day longer than expected because of the terrible conditions, so we were a little delayed. Although some riders had to pull out through exhaustion, injury or inability to carry on, their sheer guts, courage and ability is legendary: the ride from Kathmandu to the border is challenging at the best of times!

The ride today was on good roads and we were able to cruise in top gear as we took in the picturesque landscape whilst riding through Tibetan villages with snow-capped mountain peaks in the distance as far as the eye can see. There were even some fibreglass policemen – some holding radar guns, some waving, and some decorated by locals wearing silk scarves and prayer beads. 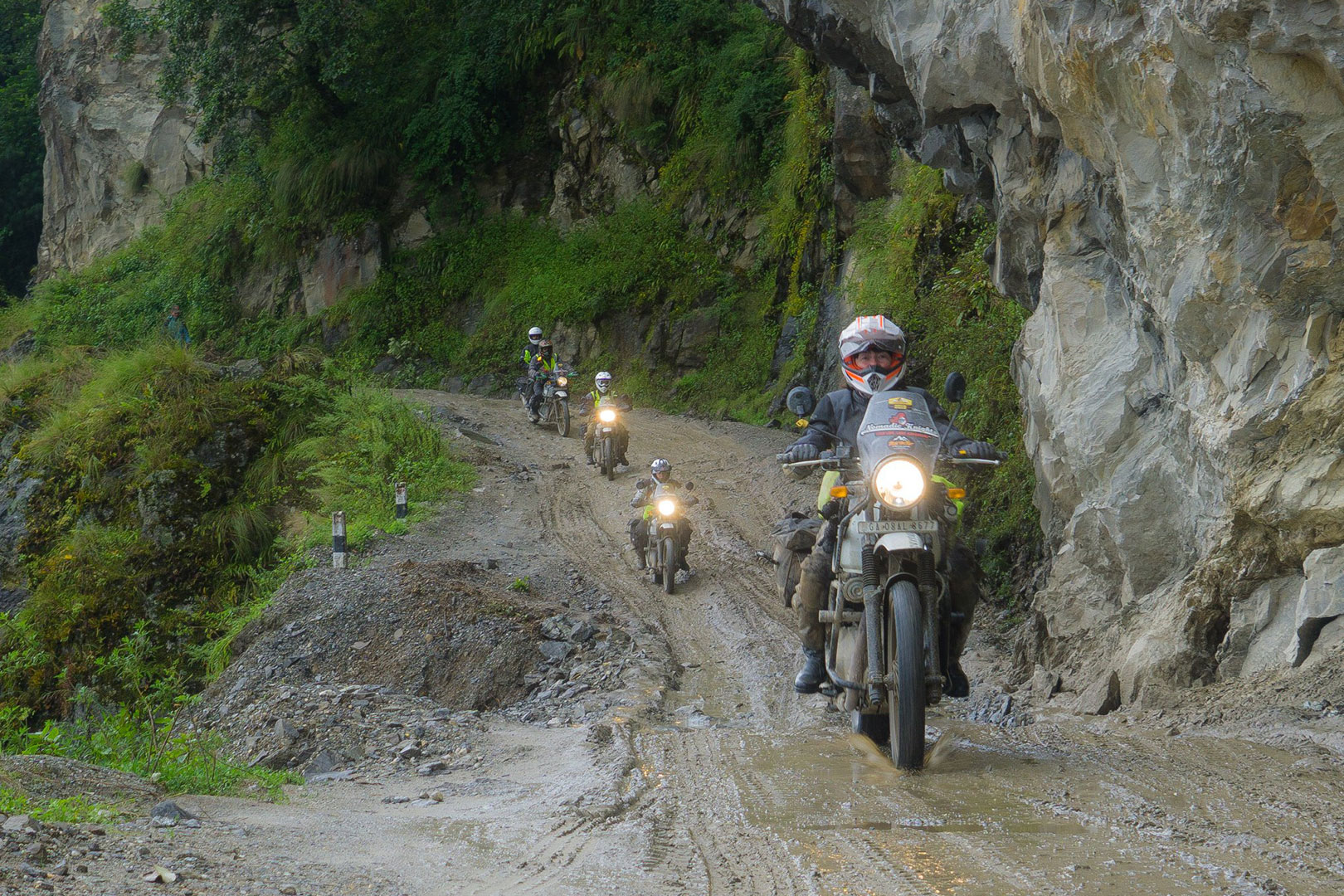 This route bypassed Gyangtse and took us along the main road from Xigaze to Lhasa, the ancient capital of Tibet, via the winding Yarlung Zangbo river. We had a leisurely start as the riding was fairly straight forward and we arrived in Lhasa with time to explore a little and have a good meal.

There’s a lot to see and do in Lhasa, one of the highest cities in the world at 3650 metres. There’s the Potala Palace, which some say is the icon of Tibet, home to 14 Dalai Lamas over the years. It’s also good to take a trip down to Barkhor Street, spend time at the Dreprung monastery or sample some of the many restaurants whilst chilling out with a cool beer.

Today was a day of jaw dropping scenery as we rode alongside and past Yamdrok Tso turquoise lake. We took on two more 5000 metre plus passes, Karo-La and Kamba-La, and rode over a huge glacier before arriving in Xigaze. 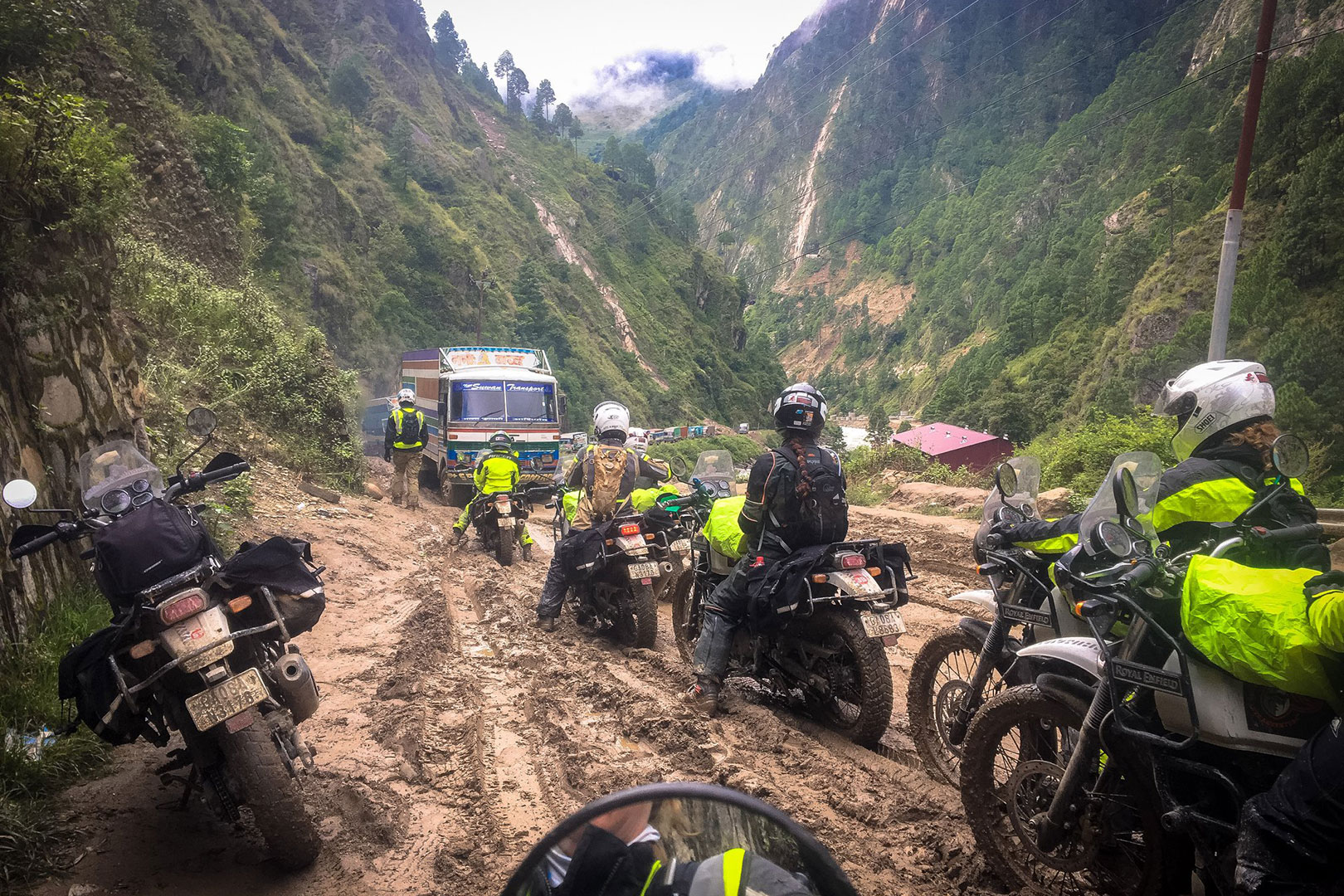 Back on the saddle, we slowly gained altitude before an abrupt rise and slow stark descent down into New Tingri. We had an early night to get ready for the highlight of the adventure…

This was the day everyone was waiting for. We rode to one of the most famous places on the planet, tackling a high pass and endless switchbacks with more than 117 curves before riding up a wide and dry valley. We arrived in plenty of time to visit Everest Base Camp at an altitude of just over 17000 feet (5200 metres). We had to dismount, leave our motorcycles securely parked and travel the remaining few kilometres to visitors base camp by electric bus. This was due to environmental issues which is a step in the right direction for the long preservation of this stunning area. The highest mountain on this planet loomed majestically just over our shoulders as we spent the evening taking photographs and watching the sun go down over her peak. I can assure you that these moments stay etched in your memory forever.

We woke up early for a final view of Base Camp and to watch the stunning sunrise over Mount Everest before heading back down towards the highway. Leaving the high altitude desert behind, we rode back down to our final night’s stay in Tibet at Gyirong. 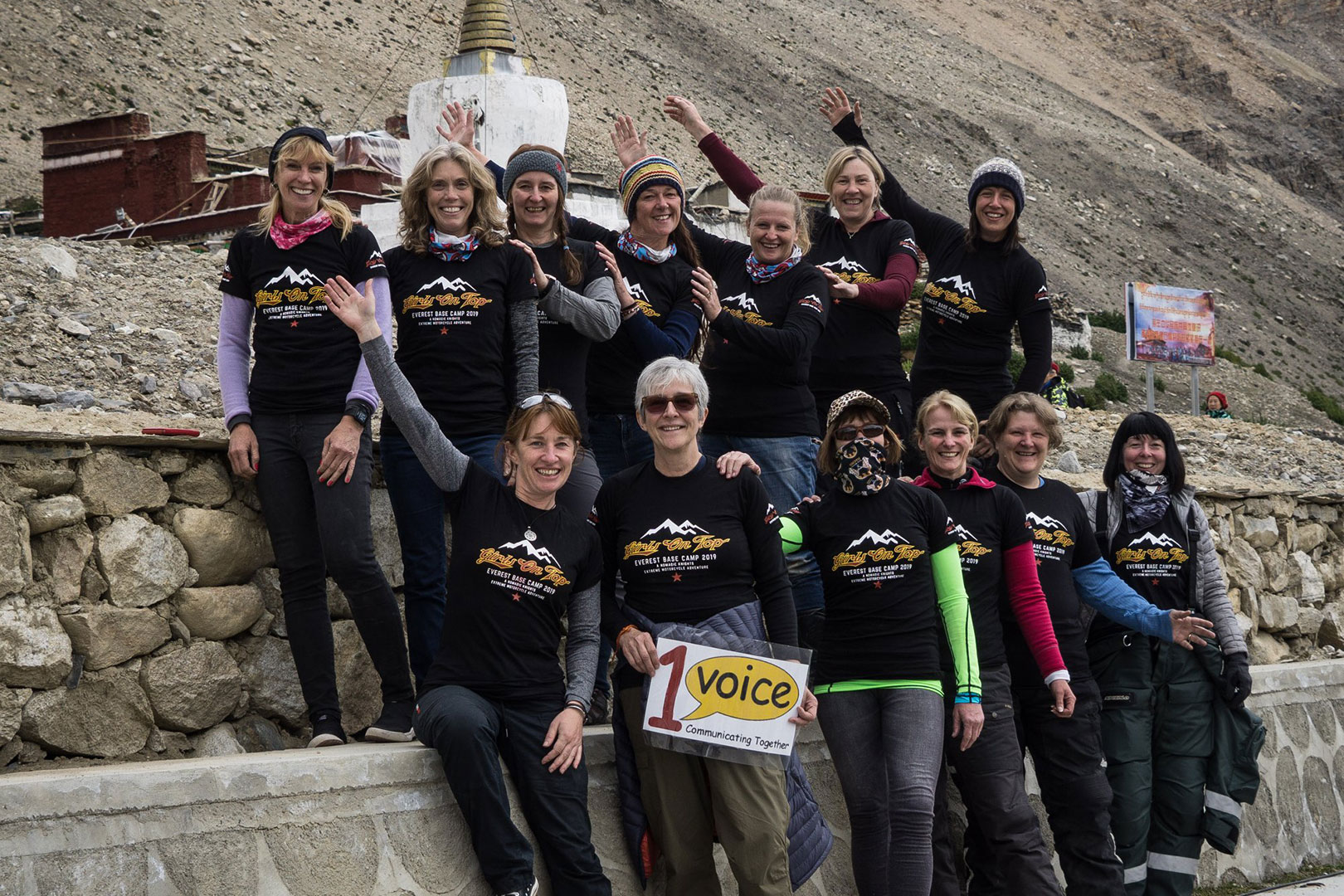 We rode out of Tibet and back to the warmth and hospitality of Nepal. An early border crossing gave us plenty of time for the journey back into the hectic city traffic of Kathmandu. We had our farewell celebration with a few drinks, maybe more, and reflected on the amazing motorcycle trip we completed.

We came. We saw. We rode to Everest.

The Girls on Top adventure has been featured in an article by MCN. Check it out here.